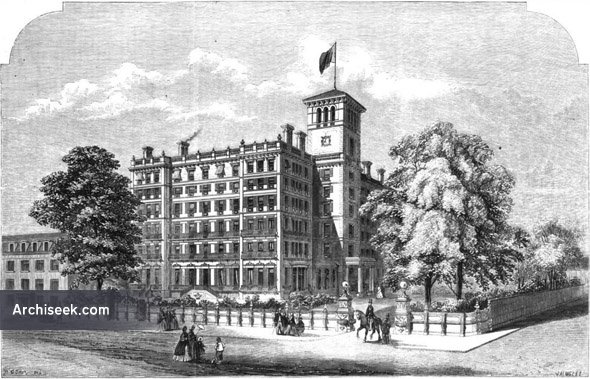 Building commenced in 1864 at a cost of £750,000. It was renamed the “Imperial Hotel” in 1867 when the lease changed hands. It reached five storeys high and boasted 240 rooms. Never a viable proposition, it closed in 1871 and, following extensive alterations, reopened in 1897 as the “Burlington Hotel”. In 1924 the owners, Frederick Hotels, closed down. The “Burlington Hotel” was used for many and varied activities after, and was converted into the Burlington Mansions complex in 1931 when converted into fifty flats.

It was an early casualty of world war two. The tower was struck in 1940 and shortly afterwards, in October 1940, another struck the huge water tank on the roof. On 7 September 1941 it was hit by several bombs and the structure was left in such a dangerous condition that dynamite had to be employed to partially demolish it. In January 1946, a fire on the upper floors resulted in further damage and demolition of the whole then proved necessary in 1949.

“This edifice, of which we give an illustration, has been undertaken by the directors of the Clarence Hotel Company, in Dover, to accommodate the increased demand which has arisen in that favourite watering-place. The site purchased by the company is freehold, in the centre of the most fashionable part of the town; and it is anticipated that this establishment will be frequented by the resident visitors, in contradistinction to those who simply pass down on their way to the Continent, to whom the Lord Warden Hotel would give accommodation. The new station of the London, Chatham, and Dover Railway, in close proximity to the hotel, renders its position still more eligible than it would formerly have been.

The property purchased exceeds one acre in extent, and the grounds have the advantage of possessing well-grown trees, which will be carefully preserved; and it is considered that the association of trees and ornamental grounds with a marine hotel will be an attractive feature in the scheme. The hotel itself is a fair example of the large structures having similar objects which are now rising up on all hands, and which appear to have taken a firm hold of the sympathies of the investing public in this country, and promise to afford ere long the same comfort in travelling which heretofore has only been found on the Continent and in America.

The Clarence Hotel has been designed with a view to comfort and convenience rather than to grandeur or show. The structure is to be thoroughly substantial, and so arranged that suites of rooms can be converted at pleasure into a private house, and, when not so required, available in the ordinary way as distinct rooms. All the modern necessities of joint-stock hotels are provided in the shape of hydraulic lifts for food, luggage, and passengers, the newest appliances of bells, speaking-tubes, and apparatus for cooking, heating, washing, &c. The corridors and staircases are built of incombustible material. The building will contain about 160 rooms in all, including a coffee-room, 55 feet by 30 feet; a ladies’ coffee-room, 45 feet by 22 feet, with a conservatory for it leading to the garden; billiard-room; fourteen private saloons or dining-rooms,and ample domestic offices.

The hydraulic machinery will be worked without cost by an Ingenious arrangement in using the head of water supplying the various cisterns from the great tower in which the main cistern is placed. The corridors and apartments will be warmed by circulating hot-water pipes; and the ventilation of each room is provided for and finally disposed of by means of distinct flues, which are excited by contiguity with the hot flues from the stokery, kitchen apparatus, laundry, Arc, so that an effective and constant supply of pure air is always in motion. The cost of the building, including the cooking and warming apparatus, will be about 50,000. The design is by Mr. Whichcord, architect, under whose supervision it is to be carried out. The first stone is to be laid on the 29th instant.” From The Builder, December 5 1863.