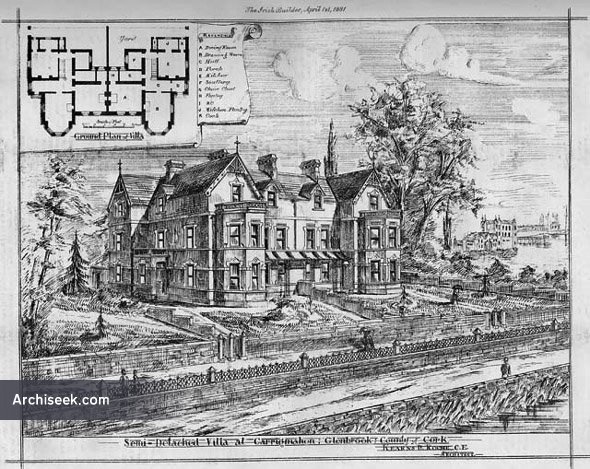 Carrigmahon Villas were built in the 1880s in the area between Glenbrook Baths and Tobin’s Quay. In 1913 one of the villas was destroyed by fire and the others were demolished soon after. Robin D. Joyce built a modern house on the site in 1930 and it was called Glencastle for a time before reverting to the old name Carrigmahon Villas.

WITH our present number we give a sketch of a semi-detached villa, recently erected at Carrigmahon, Glenbrook, County Cork, beautifully situated on the River Lee, between Monkstown and Glenbrook. This villa is one of nine connected with a building scheme which has been for some time under consideration. In drawing attention to the many advantages offered by this building site, it need only be mentioned here that for many years before this charming spot, Carrigmahon, passed into the hands of its present proprietor it was far-famed as a hydropathic establishment, conducted by the late Dr. Curtin. This circumstance will give a fair idea of the splendid supply of spring water which can be obtained for the use of the villas; and, again, the sewerage system will be most perfect, the architect having most carefully and judiciously laid out and considered these two first grand principles of health. The convenient position of this site is another advantage, which will, no doubt, greatly enhance its value in the estimation of parties about to build, it being easily reached by steamer and train from the City of Cork, whilst it is within a few minutes’ pleasant sail of Queenstown. The view commanded from the sitting-rooms of the villas will be simply charming.

The pleasure grounds which the promoters intend establishing in connection with, and at the back of the villas, will be a most enjoyable resort, being on elevated ground, and commanding pleasing views of the river, the harbour mouth, Camden and Carlisle Forts, and extending as far as Roche’s Tower, and Cork Light.
The site abounds with excellent building stone and sand; so that the excavation which is necessary to be made in clearing for building will come in most useful.
The architect to the scheme is Mr. Kearns Deane Roche, C.E., of Cork, who has laid out the ground and prepared the plans for the villas. The first villas have been erected by Mr. William Barry, contractor, Blackrock. Published in Irish Builder, Vol. XXIII, 1881.