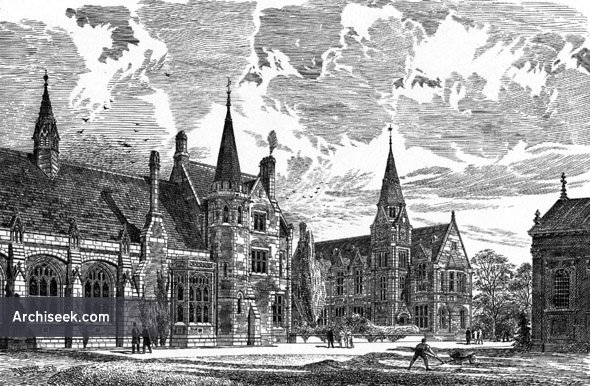 Perspective view published in The Building News, March 26th 1880. Waterhouse was responsible for much alterations in the 1870s to the medieval buildings of the college. The Great Hall was rebuilt in 1875-6 after he had declared the medieval Hall unsafe. As well as the Hall, Waterhouse built a new range of rooms, Red Buildings (1871-2), in French Renaissance style, designed a new Master’s Lodge on the site of Paschal Yard (1873, later to become N staircase), pulled down the old Lodge and the south range of Old Court to open a vista to the Chapel, and finally built a new Library (1877-8) in the continental Gothic style. Waterhouse was dismissed as architect in 1878 and succeeded by George Gilbert Scott, with some of his work being later altered in the 20th century by subsequent architects.