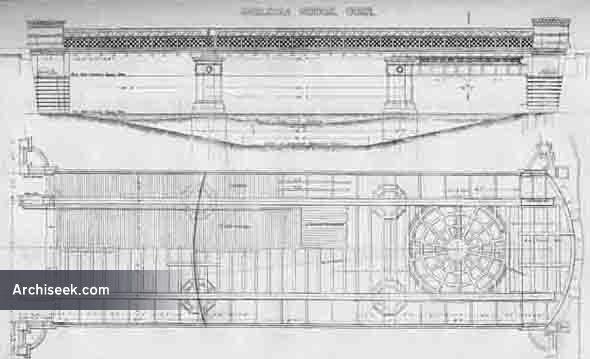 The old Anglesea Bridge, built in the 1830s, could not cope with the volume of traffic using the bridge by the 1870s. Cork Corporation decided to replace the old bridge in 1875 and chose a swing bridge designed by T. Claxton Fiddler in 1877. The building of the new bridge was dogged by delays due to contractual and legal disputes. It was finally opened on 18 November 1882 and named Parnell Bridge. The swing bridge was replaced by present-day Parnell Bridge on 24 May 1971.

“Our illustration shews elevation and plan of a swivel bridge now being erected across the Lee, the Corporation and Harbour Board of Cork jointly undertaking the expense. It has been designed by Mr. Fiddler, C.E., of London, and the contract was taken by Mr. Alexander Rooney, C.E., of Queenstown, at £16,400. Mr. Rooney has just erected the temporary wooden bridge (a separate contract), and is already working with his accustomed energy at the permanent structure. The ironwork is being supplied by the Stocton Forge Company, Stocton-on-tees, the same firm who recently executed a swivel bridge of 80 ft. span for the Great Northern Railway Company near Hartlepool. The new bridge (which, we believe, it is proposed to name after the founder of the City of Cork, St. Finn Barra) replaces one built by the firm of Sir Thomas Deane and Co., and called after the Marquess of Anglesea, the then Lord Lieutenant of Ireland. It was a handsome architectural structure, well suited to its time, but much too small for the growing requirements of the shipping trade, and the lifting apparatus connected with it was a serious impediment to the road traffic. Mr. Robert Walker, jun., architect (who is the local representative of Mr. Fiddler), superintends the work conjointly with Mr. Philip Barry, C.E., Harbour Engineer.” As published in the Irish Builder, Vol. XXII, 1880.

“The new swing bridge occupies the site of an older structure which had been found inadequate to the requirements of the heavy and increasing traffic, and the foundations of the old piers having fallen into an insecure condition, the construction of a new opening bridge was taken in hand jointly by the Corporation and Harbor Commissioners of Cork.

The new bridge, which has recently been completed, is of a somewhat novel design, and the arrangement of the swing-span in particular presents some original and interesting features, which appear to have been dictated by a careful consideration of the existing local conditions and requirements.

On each side of the river, both above and below the bridge, the quays are ordinarily lined with vessels berthed alongside each of the quays, and as the river is rather narrow at this point, the line of fairway for vessels passing through the bridge is confined nearly to the center of the river. This consideration, together with some others connected with the proposed future deepening of the fairway, rendered it very desirable to locate the opening span nearly in the center of the river, as shown in the general plan of the situation, which we publish herewith. At the same time it was necessary to avoid any encroachment upon the width of the existing quays, which form important lines of communication for vehicular and passenger traffic along each side of the river, and to and from the railway stations. Again, it was necessary to preserve the full existing width of waterway in the river itself, which is sometimes subjected to heavy floods.

These considerations evidently precluded the construction of a central pier and double-armed swing bridge, and on the other hand they also precluded the construction of any solid masonry substructure for the turntable, either upon the quay or projected into the river. To meet these several conditions the bridge has been designed in the form of a three-span bridge, that is to say, it is only supported by the two abutments and two intermediate piers, each consisting of a pair of cast-iron cylinders or columns, as shown by the dotted circles upon the general plan.

The central opening is that which serves for the passage of vessels. The swing bridge extends over two openings, or from the north abutment to the southern pier, its center of revolution being situated over the center of the northern span, and revolves upon a turntable, which is carried upon a lower platform or frame of girders extending across the northern span of the bridge. The southern opening is spanned by an ordinary pair of lattice girders in line with the girders and superstructure of the swing bridge.” Published in Scientific American Supplement, No. 446, July 19, 1884.