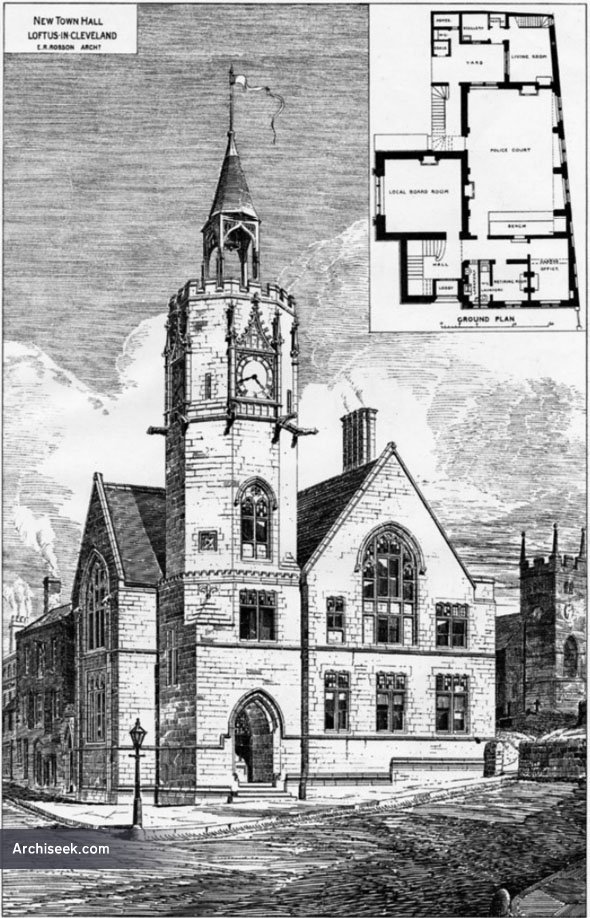 Perspective view and ground plan published in The Building News, May 30th 1879. Loftus Town Hall was built by the Earl of Zetland, erected by Mr Thomas Dickenson of Saltburn, and was first opened in 1879. The Town Hall clock has faces North, East and West, but no face to the South as the residents of South Loftus were reluctant to contribute to the cost. The Town Hall remained in the ownership of the Zetland family until 1948, when it was purchased by the former Loftus Urban District Council for £2000.

“The Earl of Zetland has acted the part of a liberal proprietor towards this small town. For many years the magistrates had experienced great difficulty in conducting public business, owing to the absence of any room or hall suitable for the purpose. With the advice of his general agent, Mr. George Dale Trotter, his lordship accordingly resolved, not only to meet the want in question, but to erect such a building as should be generally serviceable for the inhabitants.
Hie result is, the new town hall, erected in a freely treated style of Late Gothic, from the design of Mr. E.R. Robson, of Parliament-street, London. On the ground floor the building comprises police-court, local board room, clerks’ office and retiring-room. On the first floor there is s public room, news-room, office and ante-room. The site, which adjoins the parish church and has a frontage to the main street of Loftus, as well as the building stone from the local quarry, hare been presented by Lord Zetland. In addition thereto, ho has defrayed the entire cost of the building, which, with other expenses, win amount to about £4,500. A clock will be placed in the tower as a memorial to the late Lord Zetland, the cost amounting to £200, being subscribed for by the tenants and others connected with the Upheatham and Loftus estates. The contractor is Mr. Thomas Dickinson, of Salborm, and the clerk of works Mr. James Patterson. The original drawing from which our lithograph has been taken is now on view at the Royal Academy “