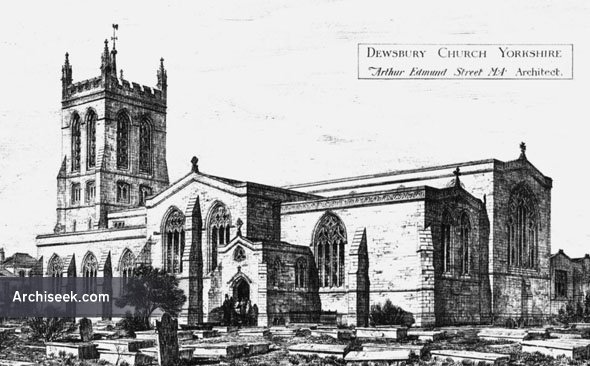 The first church on the site was probably built in the eighth century in wood. Quite a small stone church would probably have replaced this soon after and almost continuously extended during the 14-16th centuries. The Minster was in a very poor state of repair by 1764. By then it was also too small for the expanding town of Dewsbury. Permission was granted for collections throughout the county of York to pay for the enlargement and rebuilding of the Minster, the design of which was entrusted to the highly regarded architect John Carr who hailed from Horbury. His work in Georgian style can still be seen in the design of the walls in the North Aisle and in the tower dating from 1767. His matching South Aisle was demolished and rebuilt in 1895 in the Gothic Style which had become more fashionable.

In 1878 it was mooted that the whole Minster should be demolished and a new Victorian church built as had happened in many other places. However the architect Arthur Edmund Street recognised the beauty of the arches in both aisles and persuaded the church authorities not to demolish them. Instead, work started in 1884 on a major extension behind the old altar, which effectively doubled the size of the worship area. The extension turned the worship area into the traditional cross-shape facing east. The galleries in the aisles were taken down at this time but the line of an old gallery is still visible around the north aisle wall.

The effect of all these changes was to create a church of Cathedral proportions as Dewsbury and Wakefield churches were in direct competition as the seat of the Bishop for the new Wakefield Diocese created in 1888. Dewsbury lost and Wakefield became the Cathedral City. Dewsbury Minster has since been subdivided internally with the area for worship contained within the original fabric of the building prior to Street’s reconstruction and enlargment.