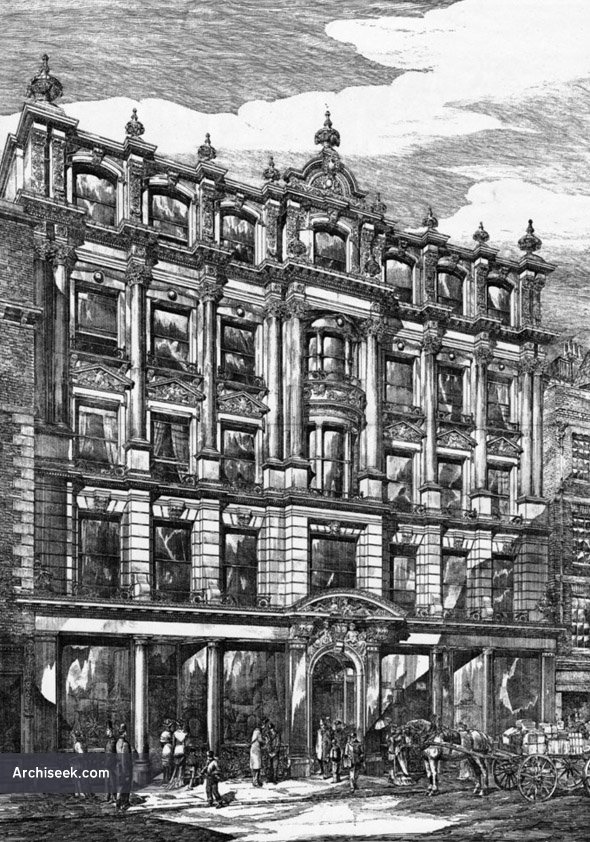 Published in The Building News, September 26th 1879. “The facade, which is in the Renaissance style, is remarkable for the large quantity of red polished granite which is used in its construction, and for the skilful manner in which the tints have been blended. The ground story consists of eight Doric granite monolithic columns and pilasters supporting an entablature, the fascia of which is also of granite. The cornice maintains an unbroken line save in the centre, where there is a segmental pediment with panelled soffit over the main entrance, which latter is formed by a semicircular archway with granite architraves, the doorway being deeply recessed and surrounded with panelled granite jambs. The tympanum of the pediment and the spandrels over the archivolt are filled in with allegorical statuary. The first floor is entirely of polished granite in jointed courses. The centre portion is kept forward, whilst the wings are set back on either side, and flanked at each end on the cornice with a handsome enriched stone vase. The windows in this story are formed by flat arches of granite, with carved stone keys, the centre one being relieved by a head of Mercury. The second and third floors comprise the main order, which is Corinthian. The shafts, twelve in number, are of granite, standing out in bold relief against a general face of granite, and are placed upon pedestals with granite dies. The entablature is broken around the columns to give a greater appearance of richness; the two columns forming the centre portion stand out clear of the remainder, and are backed by square pilasters on either side of a semi-circular bay, which is maintained during the two stories. The windows of the second floor have stone lintels and pediments, with spread eagles, Cupids, and foliage sculptured in high relief in the tympana. The circular bay at this level has a carved cornice and fascia, with granite lintel, whilst the space over is carved with festoons and wreaths. The heads of the third-floor windows are of granite, with bold centre bosses of the same material. The circular bay on each floor is divided into three “windows by small granite shafts, with finely-chased bronze caps, vases, and annulets. At the top of the third-floor the’ granite work ceases, the building above the cornice being carried up entirely in stone. The fourth floor is relieved with quarter pilasters having festoons of flowers carved in the faces, and having carved trusses at top and bottom. The windows on this floor are segmental-headed with carved key-stones and spandrel panels on either side. The centre bay here assumes a semi-octagon form in lieu of the circular one below, and has a head carved upon the key-stone, the flanks being ornamented with a caducous and a lizard and foliage. The centre is crowned with a semicircular pediment, with carved tympanum and key-stone supporting a large vase. The building internally is divided into five blocks, separated above the ground story by open areas running parallel with Leadenhall-street,the centre corridor being carried across these areas on each floor. The contractors are Messrs. Merritt and Ashby, of London-wall,’ the works being superintended by Mr. R. Roe. Mr. H. Kemp is the clerk of the works, and Mr. G. Seagood the contractors’ foreman. The external granite has been supplied by Mr. J. MacColla, 11, King-street, Cheapside, who also executed the tile work in the interior, and supplied the stoves and chimney pieces. The sculpture and carving have been executed by Signer Fucigna, of 74, Newman-street, assisted by Mr. Stocks.”