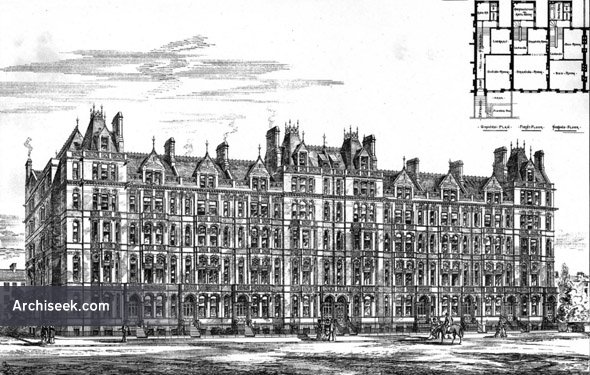 Built at Cadogan & Han’s Place, and published in The Building News, September 26th 1879. “We have before given various illustrations of mansions being erected on the Cadogan and Hans-place Estate, but they have been of a larger and more expensive character than those shown in our drawing this week. Our readers are probably aware that this estate, comprising about 2G acres, has, within the last two or three years, been converted into a building property under the powers of a special Act of Parliament. It is an extraordinary thing that so large a property in such a situation should have been left so long unbuilt upon. Building, however, having now commenced, is being rapidly carried on, and the estate is now quite worth a visit, as a study from an architectural point of view, as there are some of the best specimens of the work of the greatest architects of the day. Cadogan-terrace is the only frontage on which houses of the class shown in our drawing can be erected on the estate. These houses are being built of red bricks, with stone dressings, by Messrs. Quinn and Co., of Bermondsey, from the designs of Mr. Robert Keirle, F.R.I.B. A., Victoria House, 111, Victoria-street, Westminster. The carving has been executed by Mr. B. de Sziemanowicz.”