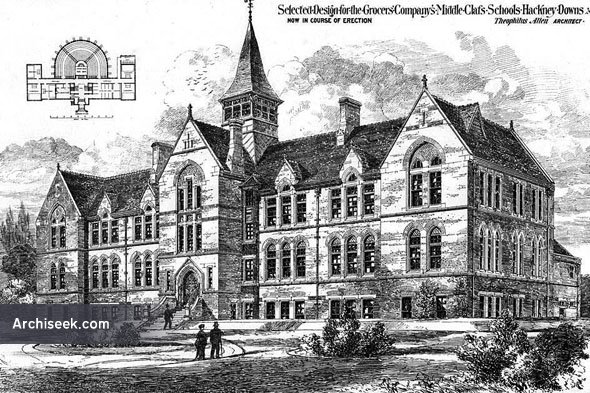 The winning entry in an architectural competition for a school for the Grocers Company in Hackney.

The Company was founded in the fourteenth century (1345) as the Guild of Pepperers. By 1373 , the Guild was known as the Company of Grocers of London. In 1428, the Company acquired a Royal Charter The Company was responsible for maintaining standards for the purity of spices and for the setting of certain weights and measures. Its members included London’s pharmacists, who separated into the Worshipful Society of Apothecaries in 1617 .

As part of the work of the Worshipful Company, a school was founded in Hackney for the sons of middle class gentlemen. This school, The Grocers’ Company School, was handed over to the London County Council and changed its name to Hackney Downs School, which was eventually closed in 1995. The building has since been demolished.