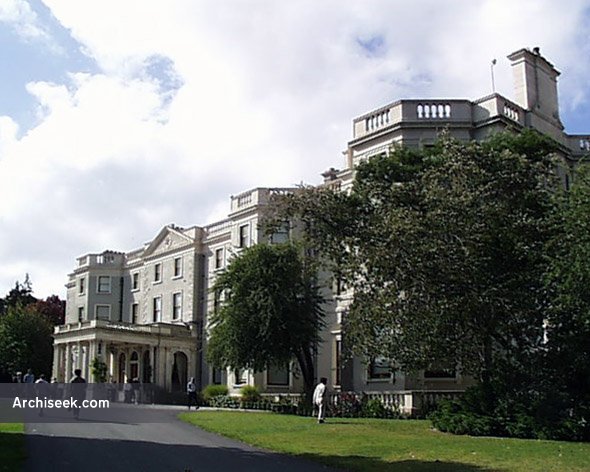 Originally a Georgian two-storey house, belonging first to the Coote family, and then to the Trenches, Farmleigh was bought by the 1st Earl of Iveagh (Guinness family) in 1870. He had it extended twice, first in 1870 to the designs of J.F. Fuller who added the third storey, and later by William Young. Young also worked on their English country seat Elveden in Surrey. Set in rolling countryside, the exterior of Farmleigh is restrained, with a sumptuous interior.

The most obvious elaborate feature of the exterior is the fine conservatory which adjoins the drawing room and ballroom. The interiors of the house are of two idioms, the older interiors are “a cheerful Baroque with much exposed honey-coloured panelling”. The best of these is the fabulous library with its balcony level around the book shelves. Also worth noting is the toplit stairwell where Fuller introduced natural light into the heart of the building. The immediate front hallway is also toplit by roundels set in the ceiling of the hallway / porte cochere.