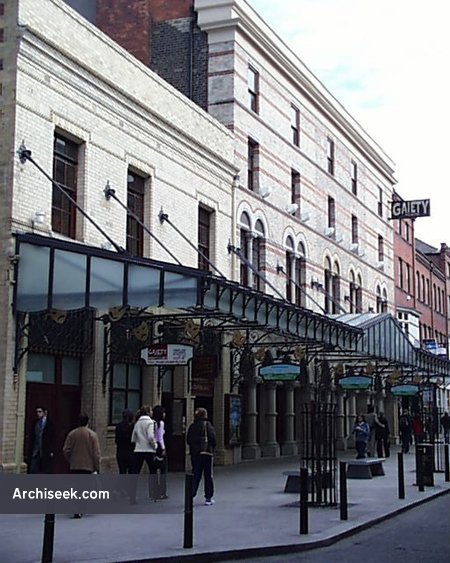 Recently given a new glass and steel canopy overhanging a much widened footpath on a mainly pedestrianised street, the Gaiety can now be appreciated properly. A fine facade, by Charles Ashworth, with polychromic bricks and arched doorways mask an amazing auditorium by C.J. Phipps. The shopping centre across the street mimics its polychromatic brickwork.

From The Building News, July 7, 1871: “On Saturday last the foundation-stone of a new theatre to be called the New Gaiety Theatre, was laid in Dublin by the Lord Mayor of that city, after which a banquet was held. Mr. Phipps, the well-known theatre designer, is the architect, and Mr. John Gunn, of Dublin, the builder. At a time when so many people in Ireland are talking about “home rule,” it is a pity the people of Dublin were obliged or felt inclined to go to Paris for a name for the new theatre, and particularly as one by the same name has recently been erected in London.”