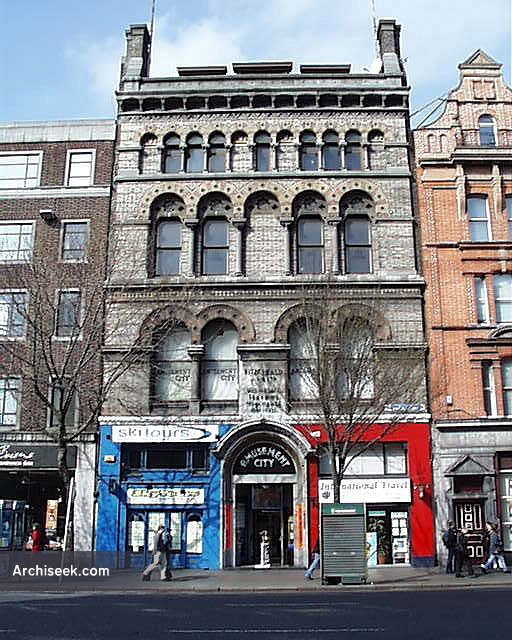 Designed as the Cramer Wood Music Store, this building has fine polychromatic brickwork and stone trimmings. Originally the doorway was offcentre, to the righthandside of the building but it was moved to the centre and altered around 1940.

“On the site in Westmoreland-street, formerly occupied by Mr. Marcus Moses, there has recently been erected a new pianoforte gallery and music warehouse for Messrs. Cramer and Co. The building just completed adds greatly to the appearance of this leading thoroughfare of our city. The front is of a mixed style of architecture—Italian-Gothic, with modifications to suit our variable climate. The upper portion is built chiefly of whiteand coloured bricks, pierced by circular hood windows, with limestone dressings, head mullions, and carved bosses, resting on limestone pillars, with foliated capitals. The arcade of the upper floor is one series of limestone columns, with ornamental capitals. The entire front is surmounted by a cornice of the same stone, supported on large consoles. The shop front is composed of two large and highly polished mahogany sashes, with plate glass windows; the porch at the entrance is also of mahogany, and the flooring is composed of tesselated pavement. On the right of the shop front is a fine hall entrance, in limestone, elaborately moulded and carved.

The first wareroom is about 50 ft. square, and from this two broad flights of stairs of eight steps each, under two arches, supported by metal columns, with ornamental capitals, lead into a larger wareroom. This—the principal wareroom—is very extensive, and a gallery, 10 ft. wide, runs along two sides of it. The gallery is also supported by metal columns of an ornamental character. This apartment is lighted by clear-storey windows from the top. All the pillars are painted in imitation of Aberdeen marble by Mr. Battersby, of St. Stephen’s-green, who also decorated the interior. The roof is supported by circular principals, which are exposed and carved. Messrs. Cramer and Co. have opened a communication with a portion of the building that was formerly the Agricultural Bank, and also with their premises in Fleet-street, so that the entire concern is now one of the largest music warehouses in the Kingdom.

Mr. William G. Murray, of Lr. Gardiner street, was the architect, and Messrs. Crowe, Gt. Brunswick-street, the contractors. The grates, hot-water apparatus, and chimney pieces were supplied by Messrs. Maguire and Sons, of Dawson-street. The firm of Alderman Gregg and Son, of Sackville-street and Great Brunswick-street, supplied the gas fittings. The mahogany fittings and counters were manufactured by Messrs. Byrne and Sons, of Henry-street.” The Irish Builder, February 1 1870.