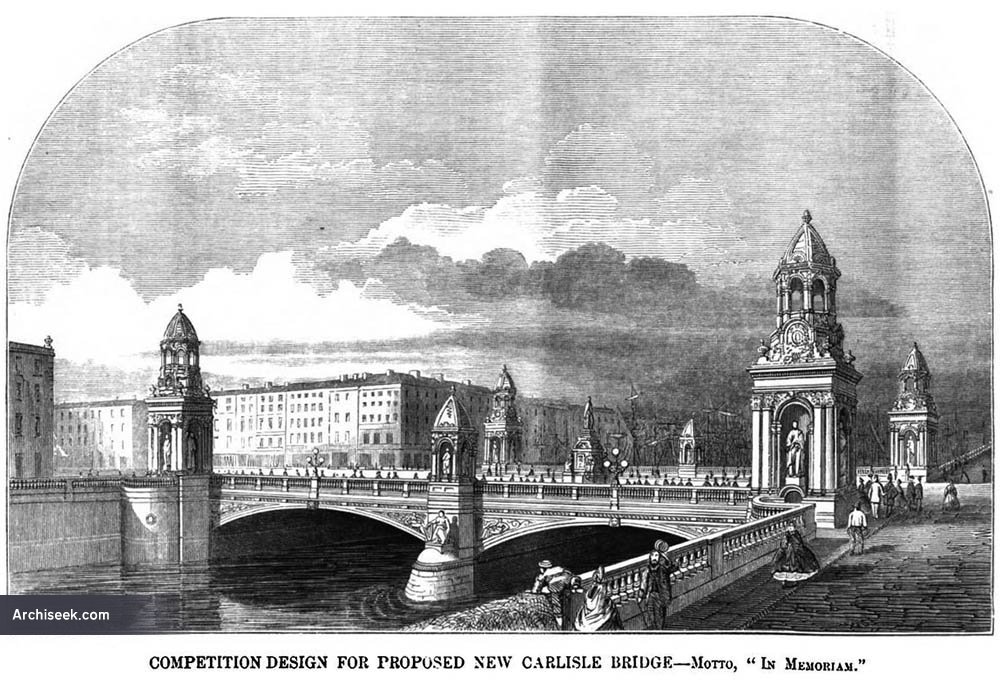 Design in architectural competition to construct a new O’Connell Bridge, replacing Gandon’s Carlisle Bridge. The Irish Builder erroneously described it as the second placed design. The firm were indeed placed second but for an Iron bridge by the Lanyons. This design was the work of W.H. Lynn. The architects stated that “Looking at it in an architectural point of view, the effect is greatly enhanced by the double arch, which gives great character to the bridge, and makes it, as it should be, a prominent feature in uniting the classic and handsome public buildings on either side of the river. By the adoption of two arches we are enabled to get a perfectly level roadway across from the site of the O’Connell Memorial in Sackville-street, and a bridge constructed on the most perfect principles of stability and economy by the use of stone for the entire work.”

“The towers that form a feature in the decoration of the bridge are not constructionally necessary, and we would suggest that they might be considerably reduced in size, and correspondingly in cost; but some such treatment as these towers would add very greatly to the dignity and effect of the whole structure. Niches are formed in the towers, to receive statues of illustrious men (placing the statues in niches, independent of increasing the effect of the figures, has the advantage of doing away with the appearanco of incompleteness which would result unless the whole of the isolated pedestal were occupied). In this way the towers, as architectural features, are complete with or without the statues, which might be added hereafter by degrees. The angle towers are large enough at the base to serve some useful purpose. They occupy positions where public conveniences are much required, and might be applied to this purpose.”

The Irish Builder, September 15 1862. “WE have received a host of letters from all parts of the kingdom, complaining of the unprecedented delay in deciding this matter; month after month elapsing, and no result being arrived at. Two of the referees have, as we understood, left town for some time, and until their return nothing can be done. With all respect for these gentlemen, and regard for their onerous official duties, we feel bound to admit that they should not have undertaken this office if they could not devote time—and promptly too-to its attention. The gentlemen who have expended a vast deal of time and labour on the drawings submitted in this competition, naturally expected that the decision would be made known within a reasonable period, but that long wished-for event seems positively to be adjourned sine die, and we cannot, therefore, wonder at the feelings of dissatisfaction so generally expressed. In plain truth, if we did not know that the Committee comprised gentlemen incapable of unworthy action, we should at once conclude, that a flagrant breach of faith had been or was being perpetrated. That it is not so, however, we are sure that we may promise the competitors, who, to say the least, are entitled to one official explanation as to the cause of delay.

We herewith—according to promise-give an illustration of one of the designs for a stone structure, without pronouncing any opinion on its merits; one of our reasons (in addition to those already stated in last Number) for presenting such illustrations as this, and the one for an iron structure, included in our Number for August 15th, being, that competitors at a distance may have an opportunity of seeing, at least, some of the designs submitted; and to evoke comment”