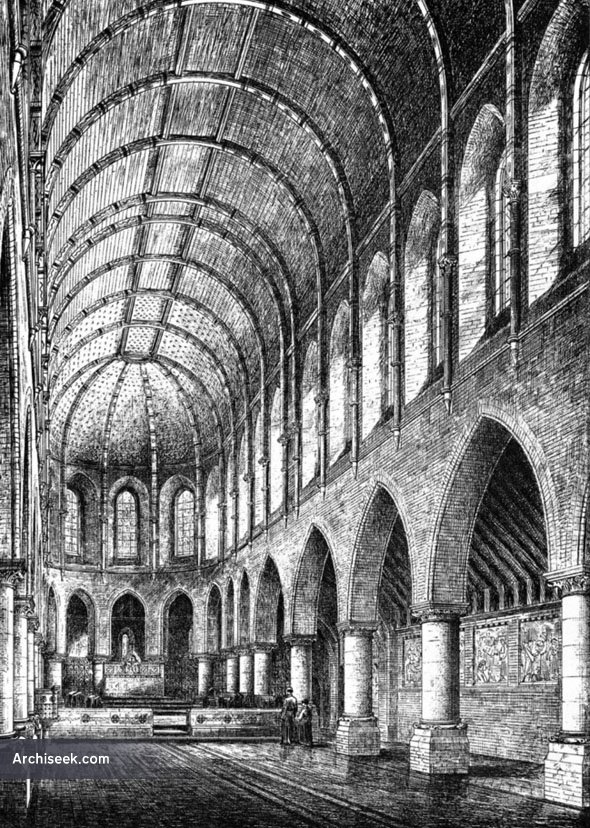 Destroyed in 1944 as a result of an air raid attack on London. Interior view published in The Building News, August 5th 1870. Described as: “The subject of our illustration this week os one of the designs submitted in competition for a new church at Clapton, Mr. James Brooks, 11, Serle Street being the architect. The accomodation required was for 700 adults, at a cost not exceeding 5,000 pounds. Economy being the primary consideration, brick was chosen as the material to be used, except in the columns, caps and bases; mounded bricks for jambs, arches and strings. Nothing could be plainer or more simple than the treatment, yet nothing could be more impressibe and dignified both in the interior and exterior of the building. The main body of the church consists of a broad nave and narrow aisles which are windowless. The whole light is obtained from large and lofty clerestory windowns. The chancel is apsidal, having an ambulatory running around it and connecting the aisles. The interior has been so designed that at a future time decorartion may be added in panels in the aisles, the stations, and in the roof; subjects from the life of Our Lord”.