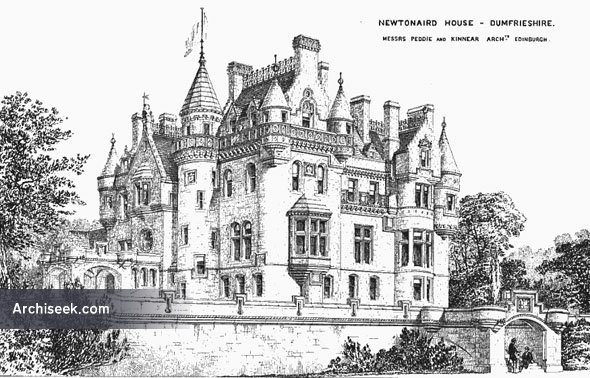 From The Architect and Contract Reporter, March 6 1869: Newtonaird House, recently erected from the designs of Messrs. Peddie & Kinnear, of Edinburgh, for P. Smith, Esq., is situated about five miles from Dumfries. It stands on the south slope of a richly wooded hill, from which the park extends down to tho river Cairn. The views from the windows of the living rooms are varied and extensive. The style of the architecture is that of the old Scottish manor house, modified to suit modern requirements””a style which harmonises more perfectly with the surrounding scenery than would be the case with any other. The exterior is of red sandstone courses from Locharbriggs quarries, about 12 miles distant, and the roofs are covered with large grey Lancashire slates. The principal floor, which is reached by a flight of steps from the entrance hnll and carriage porch, contains two drawing rooms, library, and dining room, and service room, along the south and east fronts, and the principal staircase and a large business room on the other side of the entrance. The entrance hall is groined in the ceiling, with moulded and enriched ribs of white free stone, springing from corner shafts of the same material, with which the walls are also lined. The principal staircase has a roof with framed and moulded principals, .and the ceiling of the dining room is richly panelled and moulded in_ oak. The ceilings of the drawing rooms and library are elaborately finished in plaster work in panels, and the oak doors and shutters of tho principal rooms are elaborately carved in the panels. The first bedroom floor contains six bedrooms, besides dressing rooms and bath rooms, &c., and in the upper floors are nine bedrooms of various^sizes. The ground floor of the main building contains the servants’ hall, butler’s pantry, wine and beer cellars, housekeeper’s rooms, and such like accommodation; and in a lower building behind are the kitchen, scullery, larders, &c. The washing house and laundry are at the stable offices, which have been erected at some distance from the house in a corresponding style of architecture. Tho cost of the house, exclusive of the terrace wall and entrance to flower garden, which is not yet erected, has been upwards of 11,000.