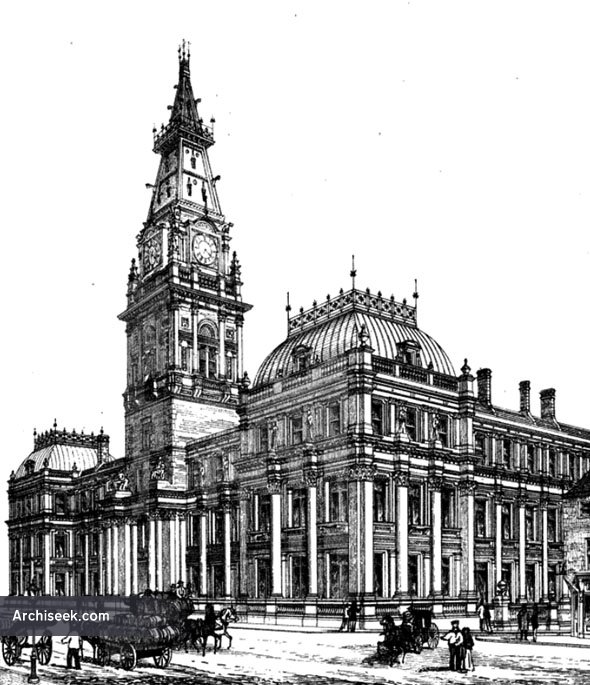 From The Architect and Contract Reporter, May 29 1869: The Municipal Government of Liverpool has arrived at its present condition, power, and comprehensiveness, by slow degrees and through the growth of years. Some forty years ago, three (indeed four) separate bodies were in existence which now are united in one. The first was the ancient Corporation of Liverpool, which managed its large landed estate, disbursed its payments, and voted monies for town improvements, public charities, and other objects. A second was the Highway Board, on which devolved the care, proper repair, and maintenance of all public streets, causeways, and sewers, and which derived its funds from rates levied on the inhabitants. The third consisted of two Water Companies, on the joint stock principle, which endeavoured to pay a reasonable dividend by supplying the rapidly increasing borough with pure water.

These three (or four) bodies are now, for good or for evil, merged in the great corporation known as the Council of the Borough of Liverpool.

The Gas Companies have, in their turn, amalgamated, and, in consequence, been restrained within certain legislative enactments in the public interest. But, as the Council have not, as in some other towns, acquired any control over this department, we are not at present concerned with it.

For some years after the merging of the various public bodies (except the Gas Company) in the Council, the different departments continued to occupy their old offices, situated in different and distant parts of the town, until the great inconvenience, growing year by year in proportion to the increase of public business, compelled the centralization of the buildings also.

The result has been the erection of the Municipal Offices. The new building has frontages to three streets GO feet wide, and a reserve of land to a fourth street of equal width, on which, at some future time, it is not impossible that a new council chamber (not included in the arrangements of the present building) and other buildings may be constructed. Its general arrangement, as may be seen by the accompanying plans, is that of a quadrangle of some 4,800 square yards, with domed pavilions at the four corners, and a tower about 210 feet high, rising out of the north front. A wide corridor runs round the building on each floor, and in each of the four internal angles are placed, in direct communication with four main entrances, stone staircases having hydrants (in case of fire) on each landing. The offices on the ground and first floors are considered to be of equal value, and are so treated architecturally, the corridor being groined in brick and plaster, and, together with the staircases, lined with a rich tile dado, while the whole of the joiners’ work, such as doors, skirtings, and window-linings, is of wainscot oak.

On the ground floor five committee rooms have been arranged. These are finished alike, with high wall framing of oak, filled in with inlaid mahogany panels by Oppenheimer, and parquetry floors. The furniture is also designed to be in keeping with the style of the rooms.

In the arrangement of the offices, the communication of one department with another, and with committee rooms, electric bells and copper speaking tubes have been used to a considerable extent. The latter are found to be invaluable for comparatively short distances, while the former have great advantages over the old-fashioned sort of bells for long distances, inasmuch as they obviate the necessity of numerous cranks and levers continually liable to disorder. The warming and ventilation consist simply of a copious supply of fresh air, warmed by a low-pressure hot-water system, open fires and apertures for -vitiated air. The result is thoroughly successful. A hoist, having a small hydraulic engine attached, lifts the coals, &c., from the basement to the various floors. The tower has a powerful clock, which will shortly be controlled by electricity to ensure accurate Greenwich time : the dials are eleven feet in diameter, and the chimes are modelled (like those of Westminster) on the bells of St. Mary’s, Cambridge ; the hour bell only weighs two tons, whereas it ought to have been six for such a town as Liverpool; this defect, however, can be remedied nt any time, the clock being sufficiently powerful to lift the hammer for’a much heavier bell.

Externally, the building is ‘of a massive columnar sort, formed of large blocks of clean hewn stone.. Its .architecture, though in some degree founded on the Corinthian type, is so independently treated that the name of no ancient style can be properly applied to it. To take a single instance, it may be mentioned that the large capitals of the principal order are nearly all modelled from English ferns instead of the exotic acanthus. The sculpture is the work of Mr. Earp, of London, who has succeeded much better in the fernleaved capitals than in the symbolical figures of the attic story. The successful application of high-class figure sculpture, nt moderate cost, forms one of the great difficulties of architects of the present day.

Some criticism has been excited by the treatment of the tower, terminating, as it does, with a square and galleried spire having corniced crockets for skyline, as forming the chief feature of such a building. The treatment may be open to criticism: but the first necessary element in the composition was undoubtedly height; the second, outline; and neither of these essentials have been wholly missed. Further, it was important that the entire result should be “¢that of a municipal tower. The total cost of the land, building, furniture, and fittings, amounts to about 160,0001.

The building has the singularity (in these days of rapid building) of having been planned imd commenced by one architect, and carried out and completed by another. And it bears marks of the handiwork of both. As a whole it does not pretend to any great or high-art qualities, but simply to be a set of public offices of solid, durable, and convenient kind, suitable to inch n town as Liverpool.

Now that the various departments are all concentrated in the new building, the use of the Town Hall must of necessity be defined. If left standing, it can hardly be used except for the purposes of the Mayor and the Council, ft is a fine building by “Wyatt, some eighty years old, and is well worthy of preservation, irrespective of its strong local prestige.