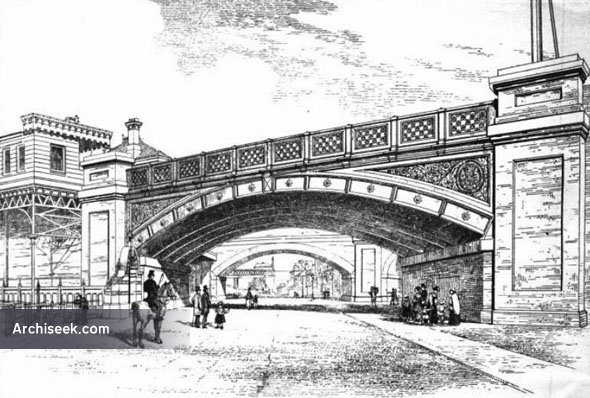 From The Architect and Contract Reporter, October 16 1869: The illustration in our number of to day gives a perspec tive view of three Railway Bridges or Viaducts which carry over the Mortlake Road so many branches of the combined system of railways that pass over the groat Victoria Bridge. The first is an iron girder viaduct with brick abutments which is too distinctly shown in the perspective elevation to need any lengthened description. Details of the foliated ornamental work in the spandrils are given to a larger scale. The second viaduct consists of a skew arch built like the abutments of brick and a very excellent sample of brickwork it is. The third is a horizontal lattice girder of wrought iron. The perspective of three largo viaducts within so short a distance carrying branches of three grand lines of railway over one line of roadway is probably unique. The engineers of the series of works of which these form a portion were Sir Charles Fox and Sons.