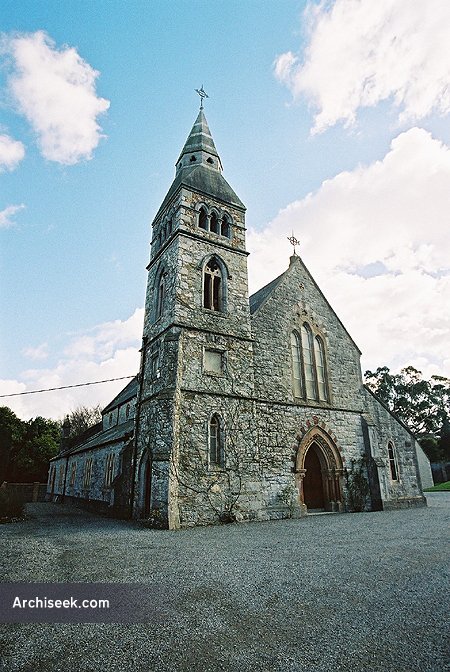 St Mary’s stands on a pretty elevated site next to the entrance to Howth Castle. Designed by J.E. Rogers, who was a student of Benjamin Woodward, it is an attractive little church with an unusual spire.

“The style is that of the thirteenth century, and consists of nave, chancel, north and south aisles, vestry, and porch. At the north-west angle stands the tower, containing the stairs leading to the organ gallery, and surmounted by the spire, which rises to a height of about 80 feet from the ground. The spire terminates in a very handsome wrought-iron gilt finial.

The lower part of the tower is old, and has been utilized in the new work in a manner highly creditable to architect and builder. The principal entrance is at the west end, through a pointed doorway with deeply-recessed jambs, the capitals and arch-mouldings being elaborately carved. The nave is separated from the aisles by a series of pointed arches of red and yellow brick unplastered, resting on polished marble columns, with handsomely carved capitals and moulded bases. The pulpit is of Caen stone, and of chaste though plain design. The general effect of the interior is pleasing, from its subdued light and colouring, altogether free from the objectionable glare observable in some modern churches. Sittings are provided for 450 persons, the total cost being £2,600. The church has been erected from the designs of Mr. J. E. Rogers, architect, by Mr. Walter Doolin, of Westland-row, builder. The upholstery and furniture were supplied by Mr. Joseph Digges, Lincoln-place. The organ is a comparatively new instrument, having been erected a few years ago by the Messrs. Telford, of Stephen’s-green, in the old church.” The Dublin Builder, July 15 1866.