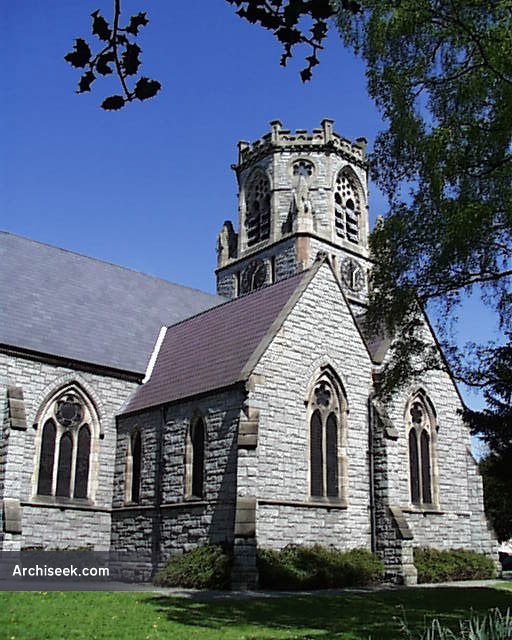 On a wonderful leafy corner site in the heart of suburban Ballsbridge, Bartholomew’s was designed in a Gothic Revival for Sidney Herbert, of the Earls of Pembroke. The original design was never completed, the unusual octagonal tower never received its intended spire. Although quite small, the exterior has a wealth of detail including the southern porch, and various doorways around the base of the tower. It is however the interior which is astounding.

If it stayed still long enough, it was decorated. At least that is the initial impact on entering this wonderful church. From floor mosaics, to wall murals, to painted ceiling, this building is a riot of colour and life. It has all the features one would expect: choir stalls, screen, organ, a beautiful apse with murals and mosaics.

Described in The Building News: “The church of St. Bartholomew, Dublin, which has been erected from the designs of T.H. Wyatt, Esq., was consecrated on Monday, December 23, by the Archbishop of Dublin. It is somewhat original in plan, having double transepts to the nave, and a tower rising over the chancel, the lean-to aisles of which form the organ chamber and vestry. There is accommodation for nearly 6OO, all the sittings being entirely free and unappropriated. The church has cost about £8,000, but it will need £1,000 more to complete the spire, purchase the organ, &c.”

The decorative murals in the apse were executed by Sibthorpe to designs from Sir Thomas Newenham Deane. These designs were based on murals he saw while in Italy at the cathedral of Monreale. The timber hammerbeam roof has been painted in wonderful shades of red, blues and greens to add to the richness of the painted walls and stonework.

The fine Victorian stained glass windows are by various designers. The glass in the chancel and the west end is by O’Connor and dates from 1869. The glass in the nave is by Heaton Butler and Bayne. Pictured are three sections of mosaics, the most elaborate is from the Altar area, while the plainest section is from the central aisle of the nave. The remaining photo was taken beside the choir stalls.

Throughout the church, no expense has been spared from the fittings, the decorative floor mosaics, to the stained glass in all the windows. Remarkably, it is also in an excellent state of repair. Long may it last.