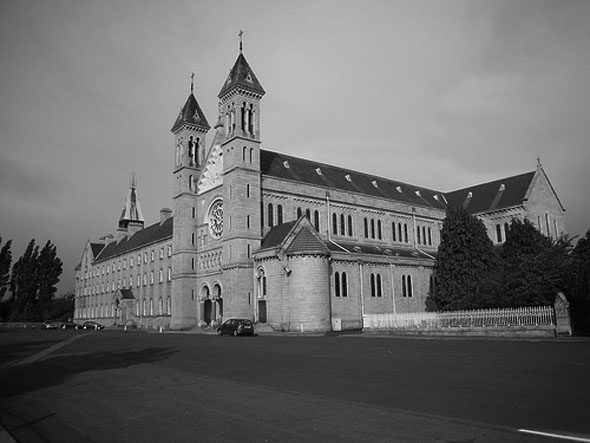 “We are partly indebted to a morning contemporary for the following details. The plan of the new church consists of nave andsanctuary, terminating in an apse ; side aisles, terminating in chapels ; two western chapels ; open porch, with stone groined ceiling and flanking campanili. The apse of sanctuary is merely temporary, as provision is made in the construction of the nave to allow of its future extension by two bays in length. A transeptal building on the north side connects the new church with the adjoining monastery, containing on the ground floor a large and commodious sacristy, and over it the choir of the community. The style of architecture is Romanesque. The general dimensions are—total length in clear, 145 ft. ; total width, 71 ft. ; height from floor to ceiling, 52 ft. ; the nave is 41 ft. wide. The composition of the principal front consists of the entrance to the church by an open western porch formed of three arches, supported on monolith shafts of polished Aberdeen granite, with moulded bases and richly-carved capitals of Portland stone.

Over the porch is a gallery, or series of niches, supported on pillars of polished Dalkey granite, and filled with statues of our Lord, St. Peter, St. Paul, St. John the Evangelist, St. Luke, St. Patrick, St. Laurence O’Toole, St. Agnes, and St. Bridget. On a band of Portland stone beneath the gallery is the carved inscription, “ D.O.M., Sub Invocatione Santi Pauli a Cruce.” Over the gallery is a large rose window formed of tracery of Portland stone and radiating shafts of rubbed slate. At the side of this window are life-size figures of the Blessed Virgin holding the Divine Child and St. Joseph, within appropriate niches. The tympanum of the western gable of the nave is treated in a manner quite unusual in our ecclesiastical architecture, and is highly successful. It contains a group of large-size figures representing the founder of the congregation of Passionists, St. Paul of the Cross, preaching a mission to a numerous auditory of various classes and conditions of life. The tympanum is protected by a boldly – moulded and carved cornice supported on carved corbels. The gable is crowned by a colossal statue of St. Michael the Archangel, clad in armour, completely gilt,

At either side of the principal front the campanili rise to the height of 110 ft. each, terminating in bell-stages of open arches with moulded cornice, and covered by pyramidal roofs surmounted by gilt floriated crosses. The church is entered from the open porch by three doors, above which are semicircular lunettes containing groups in high relief, representing scenes in the life of St. Paul of the Cross—that on the left hand being St. Paul, when an infant, rescued by the Blessed Virgin from being drowned ; in the centre the Blessed Virgin showing the habit and badge of the Congregation of Passionists to St. Paul ; and, at the right. Pope Benedict XIV. approving of the rule of the Congregation. The nave opens into the aisles at either side by broad semicircular moulded arches, supported on monolith shafts of Aberdeen polished granite, with moulded bases and carved capitals. In the spandrils between the foregoing arches are painted on circular discs the heads of the twelve Apostles. On the wall spaces between the arches and the clerestory are paintings representing the principal mysteries of the life of our Blessed Lady. Over the triumphal arch separating the nave from the sanctuary is a painting representing our Lord, his right hand being raised in benediction, his left holding a globe. At the sides are figures of the four Evangelists. The clerestory windows of the nave are formed of triplet lights, the interior arches being supported on polished shafts of coloured marbles, and the open spaces filled with tinted glass of harmonising colours.

The ceiling of the nave is what is technically called “ coved”—that is, the sides form segments of circles, and the space between is fiat. The entire is divided into panels by massive timbers, and is richly decorated in colours and gold. The ground-work is delicate blue. In the coved panels are painted heads of saints and prophets ; and in the flat panels are painted monograms of the Holy Name, and of the names of the Blessed Virgin and other saints. In the apse of the sanctuary stands, under an elaborate baldachino, the high altar, a beautiful work of Italian art, composed of various coloured marbles, including malachite, verde antico, rosso antico, and Mexican onyx, &c. It is the gift of a lady and gentleman of this city.

The Passionist Fathers owe to the generosity of individuals and private friends (some of whom had previously contributed to the building) every object of decoration and furniture which the church contains. Marble slabs inserted in the handsome front of the organ gallery will commemorate the names of these generous benefactors. Turning into the south aisle we find at its east end the Chapel of St. Joseph, erected, with the marble altar, at the expense of the late Francis O’Farrell, Esq. At the west end of the same aisle is situated the Chapel of the Pieta, erected, with its altar, furniture, stained glass, and other decorations, at the sole expense of the laie Patrick Boland, Esq.

The west window of this chapel contains in stained glass, a beautiful figure of St. Elizabeth of Hungary. Stained glass also fills all the windows of south and north aisles, and these are memorials of deceased or living benefactors of the church. Those in the south aisle, beginning at the east end, contain figures of our Lord, showing his Sacred Heart ; St. John the Baptist (erected by Mrs. Pigot, in memory of the late John Edward Pigot), St. Patrick, St. Bernard, St. Ignatius, St. Dominic, St. Thomas Aquinas, St. Francis Assisi, St. Aloysius, and St. Teresa. The Chapel of the Sacred Heart, with its marble altar, is at the east end of the north aisle ; and at the west end is the chapel of St. Mary Magdalen.

The stained glass windows of the north aisle contain figures of our Lord, St. John the Evangelist, St. Anne, St. Alplionsus. The west window of the Chapel of St. Mary Magdalen contains figures of St. Laurence, and St. Sebastian. The church, as well as the monastery adjoining it, was designed by Mr. J. J. McCarthy. The entire of the sculpture and painted ceiling and wall decorations are by Messrs. Earley and Powells, of Upper Camden-street. The organ was originally built by Merklin and Schutze, of Belgium, and is at present being remodelled and enlarged by Mr. Thomas White, of Lower Baggot-street. The tiling of the floor, which is of a very beautiful pattern, was supplied by Messrs. Monsell, Mitchell, and Co.”