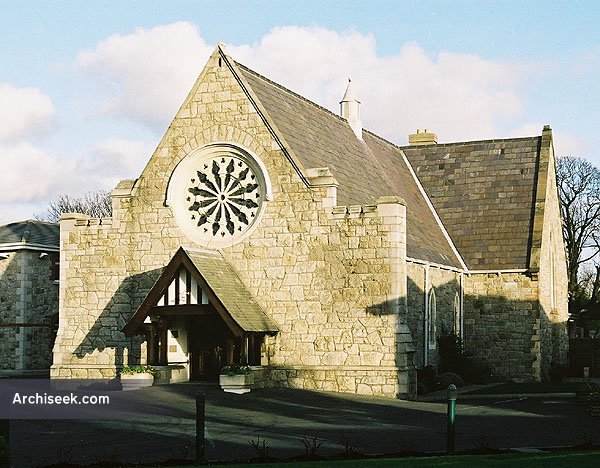 Pretty little church building in its own extensive grounds. The church is a simple Gothic Revival design with a decorative rose window in the west façade. The porch was added as First World War memorial by G. Beckett. The interior has stained glass by Evie Hone.

“The ceremony of laying the foundation stone of the Wesleyan Methodist Chapel, Sandymount, took place on Thursday last, 28th ult., in the presence of a large assemblage of ladies and gentlemen. Tho building is intended to accommodate, with gallery, about 2.50 persons. It is in the Early English style ;’ soft, in length exclusive of vestry in the rere), and 22 ft. in width, the vestry being also the width of the chapel, and having separate entrance. The walls are of granite (checker work); there are four windows on either side, the dressings of which are of Caen stone. The entrance porch is in the centre of gable front of the chapel facing Ashgrove-avenue ; there is an ornamental circular window over same, with Caen stone mullions, ice, and this elevation is terminated by spire buttresses. The ceiling is panelled in hexagonal form, and the roof principle continued down to cut stone corbels; the height of building internally being 25 ft. The pews are placed in the centre, having a passage at either side next the wall, with carved bench ends; the pulpit and platform being at end of chapel communicating with vestry. The cost will not exceed £1,000, and is being erected by Messrs. Beardwood and Son, contractors, of Westland-row, from the plans and under the superintendence of Alfred G. Jones, Esq., architect, of Molesworth-street.” The Irish Builder, May 1 1864.