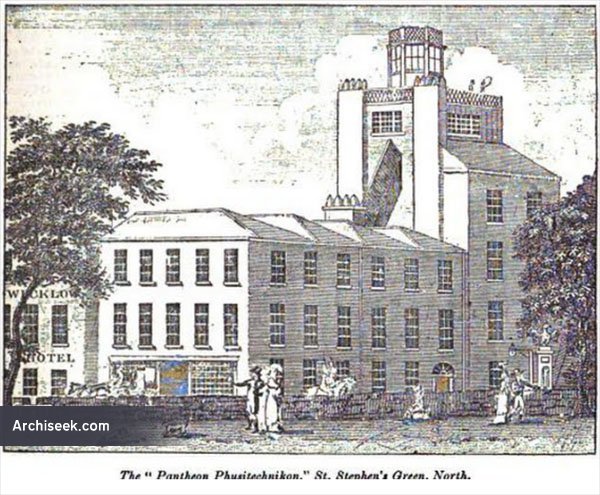 “The following is an extract from a note furnished to us many years since by the late John Swan Sloane CE a gentleman who contributed several papers to our journal. Valuable and curious view of the old Pantheon Phusitechnikon at corner of Kildare street Stephen’s Green. Although I can t remember it it was often described to me and I had toys bought there in I suppose 1820. The shop was afterwards occupied by Messrs John and Joseph Goldsmith grocers and wine merchants in 1821, and was unaltered except that the gazebo was taken down from the roof of the house in Kildare street. The Wicklow Hotel, No 24, was afterwards converted into two shops EM Robinson’s sewed muslin emporium and Butcher’s Italian warehouse. The Pantheon Phusitechnikon retained the name long after the Goldsmiths got it, and I cannot say when it ceased to be a huge toy shop. James J. Nolan made a wretched attempt at an imitation years after on Bachelor’s walk” The Irish Builder, August 1 1894

In 1798, William Binns, an ironmonger, rebuilt what is now 25 and 26 St. Stephen’s Green as a house with a toy and fancy goods shop. In Kildare Street to the rear of this, he erected a tower with gazebo on top. The viewing gazebo offered a panoramic view of Dublin, but was removed in 1821. The business ceased in 1816, when the stock and contents of the shop were auctioned. The whole premises, known as the Pantheon Phusitechnikon was later demolished.