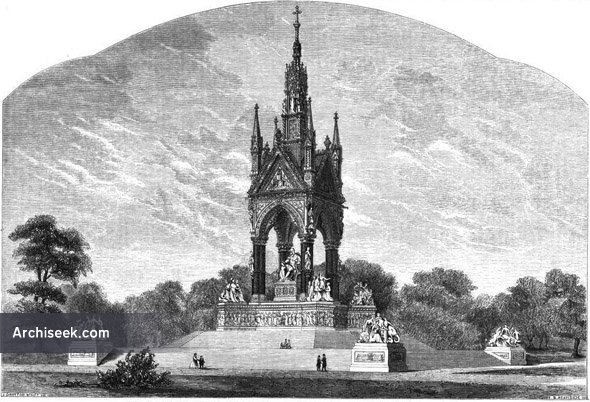 Selected design as published in The Builder, May 23 1863. When Prince Albert died on 14 December 1861, the initiative was taken by the Lord Mayor of London, William Cubitt, who appointed a committee to raise funds for a design to be approved by the Queen. The control and future course of the project, though, moved away from Mansion House, and ended up being controlled by people close to the Queen, rather than the Mayor. An initial proposal for an obelisk memorial failed, and this was followed in May 1862 by the appointment of a seven-strong committee of architects. A range of designs were submitted and examined. Two of the designs (those by Philip Charles Hardwick and George Gilbert Scott) were passed to the Queen in February 1863 for a final decision to be made. Two months later, after lengthy deliberations and negotiations with the government over the costs of the memorial, Scott’s design was formally approved in April 1863.