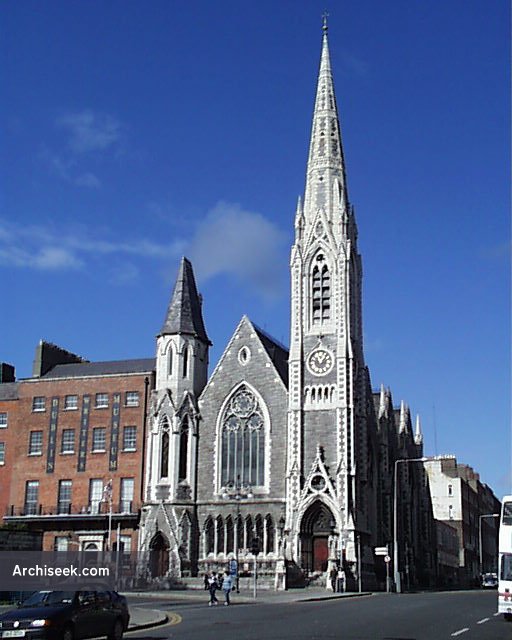 In the 1860s the growth of the Prebsyterian congregation and a substantial increase in rent on the Mary’s Abbey property made it desirable for the congregation to seek new premises. By the great generosity of Alexander Findlater, a Dublin merchant, the present site in Rutland Square, now Parnell Square, was bought and a church building was erected at a cost of £14,000. The building is popularly known as ‘Findlater’s Church’ and is referred to by that name in two of James Joyce’s novels. The opening services were held in November, 1864.

Described during constructed in The Building News: “A new Presbyterian church, in the Decorated Gothic style, is in course of erection, in Rutland-square, Dublin. The church, internally, is 90 ft. in length, and 50 ft. in breadth, and is divided on either side by two stone piers, which carry the roof timbers. The principal entrance is by the main doorway in tower, which leads to vestibule and passages. The octagon turret contains the stair leading to the small gallery which extends over one end of church. The division of the church into three bays or arches is marked externally by three gables in the side to North Frederick-street. These gables are pierced by richly traceried windows presenting a slightly novel arrangement. A vestry and session-house, with large rooms for congregational purposes, complete the design. This church, with its lofty spire, 180 ft. in height, together with its commanding position, will add to the architectural embellishments of the city. The architect is Mr. Heiton, of Perth, from whose designs the Presbyterian churches of Rathgar and Kingstown were also erected. All the works are being executed by Mr. Samuel Bolton, at the estimated cost of £10,110, under the superintendence of Mr. Leiper, the resident assistant of Mr. Heiton.”

“THIS church was erected many years ago upon what was in pre Union days the site of the fine town mansion of the Earl of Bective, who had also a residence in Smithfield (see under Dublin Mansions in our next issue for fuller particulars). The church, which is 90 ft in length by 50 ft in breadth, is divided on either side by two stone piers which carry the roof timbers. The principal entrance is by the main doorway in tower, which leads to vestibule and passages. In the octagon turret is the stair leading to the gallery, which extends over south end of the church. The division of the building into three bays is marked externally by three gables in the side to North Frederick street. A vestry with spacious rooms for congregational purposes complete the design, this being in the Decorated Gothic style. This church with its spire 180 ft in height adds considerably to the architectural beauty of this part of the city and the fine square which it adjoins.” The Irish Builder, January 1 1893.