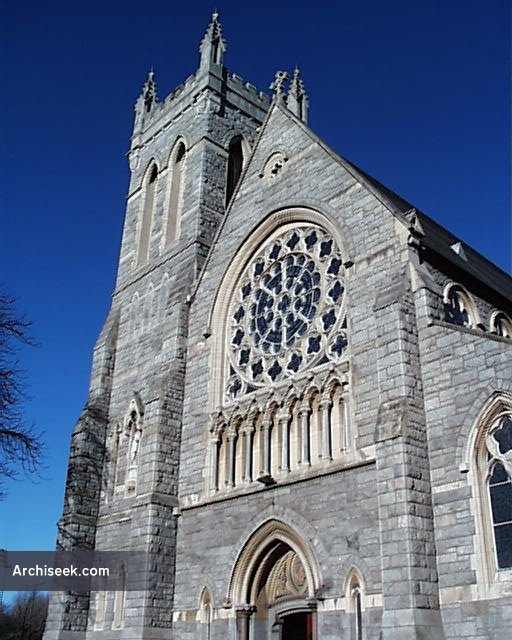 Originally designed by Patrick Byrne, but he resigned the commission in 1863 (at this stage he was in his eighties). The project was then taken over by the relatively new practice of Pugin & Ashlin.

The church never received its intended spire, the pinnacles on the tower date from 1910 after it was decided to abandon all hope of ever building it. The exterior is of granite with Bath stone dressings, notably in the tympanum above the main door. This was carved by Earley and Powell who also completed much of the interior, notably the altar. They also stencilled the timber roof, but this has since been painted out.

“This Church, of which we give the north-west view as our illustration, has been erected on a most eligible site at the intersection of numerous public thorough- fares at the Donnybrook Bridge, and in close proximity to “the Green.”

The church consists of nave, aisles, chancel, side chapels, south porch, sacristies, &c., with a tower and spire at the north-west angle. The dimensions are: — length, 146 ft., total width, 60 ft. 6 in., width of aisles, 13 ft., height from floor to ridge, 59 ft., height of tower and spire, 151 ft., of which 73 belong to the tower. The aisles are separated from the nave by an arcade of six arches, resting on polished Cork marble shafts, with carved Caen stone capitals and base mouldings of Carrara marble, resting on plinths of Kilkenny marble. The aisles are lighted by lancet windows, three to each bay. Arches are thrown across between the piers of nave arches and the aisle walls, resting on the caps of nave columns and the aisle walls (the buttresses show their position externally), serving as flying buttresses to the clerestory ; the effect of this arrangement internally is very pleasing. The cleiestory is lighted by cinquefoils, two to each bay. The chancel end is semi-octagonal, each side pierced with a two-light window, filled with stained glass ; these windows have gablets rising into the apsidal roof.

The side chapels, which terminate the eastern end of the aisles, have richly traceried rose windows, and are separated from the chancel by an arcade of two arches.

The sacristies are grouped round the apse in rather a novel form. The aisle walls are continued down 13 ft. clear of the rear wall of spire, having a passage in the centre, the sacristies being arranged right and left of this passage. The entrance to the church is in the centre of the wall immediately behind the high altar.

The organ gallery is over the western end of nave, supported on an arcade of three arches, with marble shafts, &c. ; under the organ gallery internal porches are formed. The roof is open, with arched principals, two to each bay, having ornamented dormer ventilators, one in each bay.

The principal feature externally is the rich rose window in the west front, beneath which are a row of niches, to be filled with statues hereafter. In this front is the principal entrance — a fine bold doorway, with a richly carved tympanum, by Earley and Powells, who also executed the cross on west gable. There is an entrance also through the tower on the north side.

All the ironwork (except the cross on apse, which is by Skidmore, of Coventry) is very creditably executed by Mr. Pagan, of Great Brunswick-street, from the drawings of the architects.

The works have been completed (excepting the spire, and the enclosing wall and lich gate shown in the view) in the most creditable manner by Mr. Michael Meade, builder, of Great Brunswick-street, Dublin. The high altar is being executed from the designs of the architects, by Mr. O’Callaghan, of Bachelors’ Walk, Dublin. It will be an elaborate work entirely of marbles of various colors ; the carved panels, three in number, will be in Carrara ; the columns will be alternately of green and red Irish marbles. (We understand this beautiful altar is the gift of a lady member of the congregation.)

The style of the church is Early French ; the details throughout evidence much careful thought and study on the part of the architects, Messrs. Pugin and Ashlin, of Stephen’s Green and Ely Place, Dublin. The cost up to the present has been about £7,000. ” The Dublin Builder, August 15 1866.