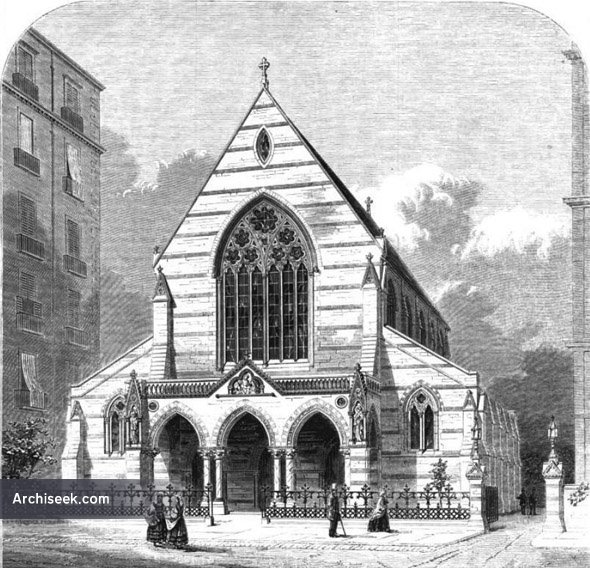 Following a handwritten note by Giuseppe Garibaldi gifting the land to the church, this beautiful building as it stands today was built in 1863. Public conscription and government funds contributed to the fine neo-gothic building, designed perhaps more as a statement of British power than to meet the needs of a potential congregation.

“In our notes ” Going Along,” we have had occasion to remark on the aspect of some of the buildings abroad used for the services of the Church of England. In Naples we are glad to find a worthy building is being erected for the purpose. This church, of which we give an interior view and the plan in our present number, has attracted considerable attention, moreover, on account of its being the first Protestant church erected in the South of Italy. It is now being carried up under the superintendence of Messrs. Thomas Smith & Son, of London, whose design was selected by the Naples committee in a limited competition of twelve English architects. The style of the church is that which prevailed at the end of the thirteenth century; and the plan consists of nave, north and south aisles, and chancel with semi-decagonal apse. The aisles are continued to the commencement of the apsidal end, and form a vestry with organ gallery over on the south side, and a chapel for invalids on the north. A handsome arcaded carriage porch, the width of the nave, having three doorways leading into the church, is placed at the east end or principal front next the street. Open seats with inclined backs will be provided to accommodate 600 adults.

The walls are built of different coloured tufos from Sorrento, of red, grey, brown, and stone colour tints. Care has been taken in selecting the tufos that will stand the external sea air, as those at Naples, having a large proportion of the oxide of iron, crumble away with the least wind. The architects, in selecting the tufos, found that the quality of the material in each quarry is different in proportion to the depth of the excavation. The upper surface is light, friable, and contains more pumice; while the lower stratum, which has undergone much pressure, is compact and of a darker colour: that lower than the sea level is nearly black. The tufo is very cheap and easily worked, being cut with a hatchet: it is set with a very close joint in regular courses. The external dressings of the windows, doorways, &c, are executed in white Malta stone, which is very Bimilar to our Bath stone; but for all the internal dressings and the work intended to be carved, a beautiful fine-grained stone, also from Malta, has been used. This stone is like Caen stone in colour, and is easily and effectively worked. All

the carving will be from natural foliage, and the caps of the nave shafts will be varied by the introduction of figures among the foliage. The chancel will be groined, as shown in the engraving, and will be paved with Minton’s tiles. AU the joiners’ work will be sent from England, on account of the inferiority of the Neapolitan joinery. The roof over the nave, as will be seen in the view, is waggonheaded, with moulded horizontal and vertical ribs dividing the cants into square compartments, with moulded arch ribs springing from wall to wall over the nave piers. The ceiling will be formed with plaster between the moulded ribs, and afterwards enriched with suitable decorations in colour. The aisle roofs are similar to the nave roof. The whole of the roofs will be covered with Bangor slates, sent out for the purpose. The windows will be doubly glazed, on account of the great heat, and it is proposed to fill the chancel windows with stained glass. The work is being carried out by native workmen, under the direction of Mr. Pulham, an English foreman, who has been employed under the architects upon works abroad for about fifteen years. Hereafter we shall give a view of the exterior.” From The Builder, October 24 1863.

“The site in Naples on which the English Protestant Church is being erected, was decreed by Garibaldi in 1860, in words the purport of which we gladly record :””
“Grateful for the powerful and generous sympathy of the English, the Dictator considers it but a slight return for so many benefits received from them in favour of the noble cause of Italy, to decree””Not only Is permission granted to build a church on the territory of this capital to men who worship the same God as the Italians ; but they are requested to accept, as a national gift, the small space required for the pious object to which they Intend to dedicate it.””G. Garibaldi.”

We add to the illustrations of the building given in our last* a view of the exterior. The estimated cost of carrying ont the complete design of the architects, which includes a tower not shown in the view, is 5,800/. In aid of this subscriptions are still being sought, and ought to be forthcoming.” From The Builder, October 31 1863.