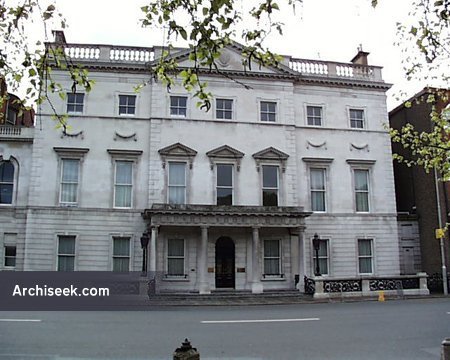 Iveagh House is now the Department of Foreign Affairs as it was donated to the Irish State by the Guinness family in 1939. Originally two houses, nos 80/81 St Stephen’s Green, no 80 was originally designed by Richard Cassels in 1736. After both houses were bought by Benjamin Guinness in 1862, he acted as his own architect and produced the current house.

“In this number we give a sketch of the town mansion of Mr. Benjamin Lee Guinness, M.P , now in course of erection in Stephen’s Green, South, the grounds of which run down to those of the Winter Garden. As an illustration so very quiet and unpretending a front is less remarkable as a work of architectural importance than from the interest which the name of that well-known and respected owner gives it, and from whose own designs it is said to have been built. The interior of the mansion promises to be of a very important and costly character, and to this we hope to have the pleasure of returning on a future occasion when it is more fully advanced. The works, we believe, have been carried out by the Messrs. Murphy of St. Patrick’s Cathedral notoriety, under Mr. Guinness’s own immediate directions, without the intervention of any professional architect.” The Dublin Builder, February 1 1866. 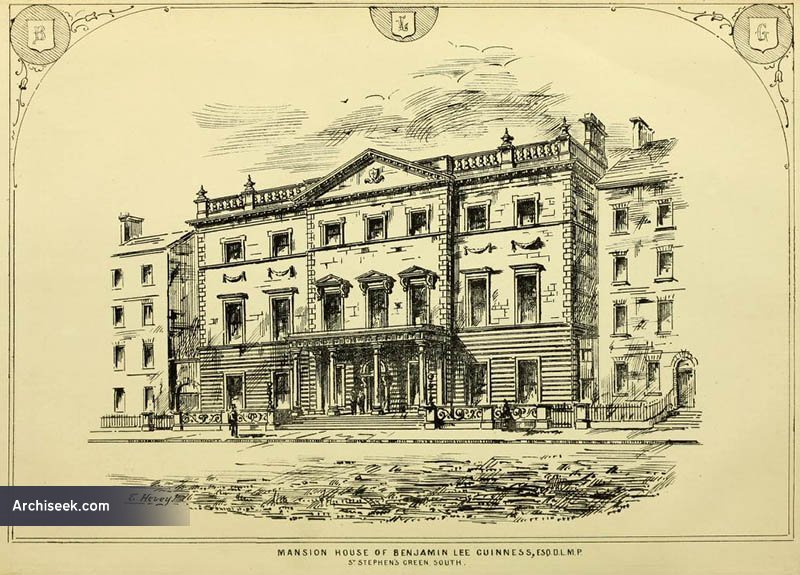 Finished in Portland Stone, the building has a severe appearance. Of nine bays the central three are broken forward and pedimented. The interior of the building is hugely elaborate and decorative with an incredible staircase and ballroom. Both are lined with alabaster and the staircase has ornate victorian ironwork as well as marble columns and circular roof lights.