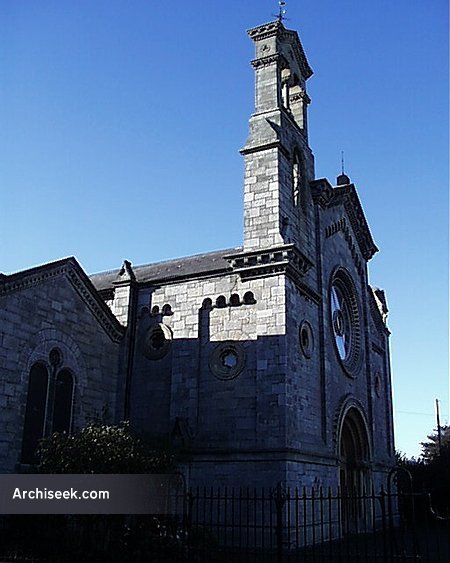 The first Dublin commission of Belfast firm Lanyon, Lynn and Lanyon, this little Italian Romanesque church replaced an earlier one of 1826. In 1880, the original galleries were removed and aisles added. The interior has a fine window by Harry Clarke dating from 1921.

“THE works now in progress at this church consist of an addition to the western end in the Italio-gothic style, and the removal of the plaster ceiling internally, the present roof timbers being exposed to view, the under side of the rafters sheeted with deal, the roof trusses wrought and rendered ornamental by certain additions, and the whole stained and varnished. The addition is calculated to give some architectural pretension to the present very unprepossessing structure, and affords internally three porches with entrances, stairs to gallery, and an organ loft. In the front elevation is the principal entrance, a deeply recessed semicircular arch, springing from four columns with sculptured capitals, and divided within into a double doorway over which is a tympanum filled with decorative perforations. Above, the face of the building is divided in to three bays by pilasters, terminating in an inclined corbel course under the cornice,the central bay is filled with a handsome rose window. The gable follows the slope of the present flat roof, and is sur mounted by a deep cornice. There is a bell turret with an open belfry stage and pyramidal stone roof on the southern side. Certain portions of the work are intended to be commemorative of the late Archdeacon Irwin, and to bear suitable inscriptions. Messrs. Lanyon, Lynn & Lanyon, of 64, Upper Sackville-street, are the architects; Mr. Butler, contractor. The first stone of the addition was laid on the 25th ult, by the Archdeacon of Kildare.” The Irish Builder, August 1 1860.