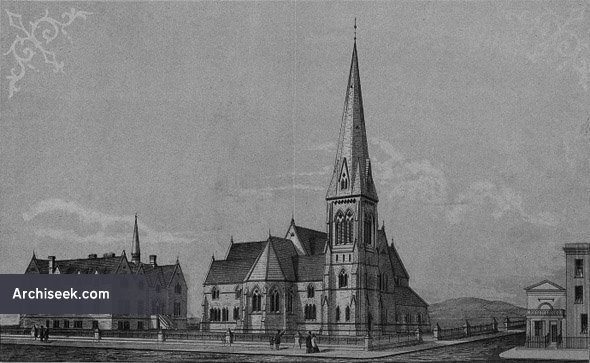 Winning entry for an architectural competition held in late 1859 to design asylum and adjoining Christ Church. Unsuccessful entrants included William G. Murray, John McCurdy, and William Barre. Foundation stone was church laid in June 1860 with construction completed with the erection of the spire in 1880. No longer in use, closed in 2012, sold in early 2015 for redevelopment.

Carroll was described in his obituary in the Irish Builder as a “kindly, upright, courteous gentleman” whose “clients were in a real sense his friends, no trouble was too great for him to take; indeed, his attention to detail was extraordinary, and therein lay the secret of much of his success.”

“The new Molyneux Asylum and National Institution for blind females of Ireland, at Dublin, was opened last week. Accommodation is provided for about 100 blind females. The chapel, which will be opened to-day (Friday) will contain seats for 1,250 persons. The new asylum, it is calculated, will be supported thus : — £250 per annum will be derived from the interest of legacies to the old Molyneux Asylum ; £300 yearly will probably be obtained from collections in the chapel, being 40 per cent, on the cost of its erection; and it is hoped that £1,500 will annually be subscribed by all Ireland for the support of the institution. The asylum is a handsome building, in the Tudor Gothic style of plain character, with high pitched roofs and gables, and dormer and mullioned windows. Granite is the material used, the window and door dressing being chiselled, and the general face of the walls of hammered stone. It has three floors. On the lower or basement floor are the kitchen, dining- room, laundry. and servants’ apartments. On the ground floor are a day- room, a music-room, and a board-room ; these three chambers being divided by folding doors, so as to admit of being thrown into one large apartment for Sunday school and other meetings, capable of accommodating 300 or 400 persons. To each room there is a distinct side entrance. The rest of this floor is occupied by the secretary’s room, library, and matron’s apartments. The upper or highest floor contains the dormitories, lavatories, and bath-room: also the infirmary, which has a distinct entrance from the main staircase, and is quite separated from the rest of the house, Mr. Rawson Carroll is the architect, and Mr. Bolton is the contractor for the works.”