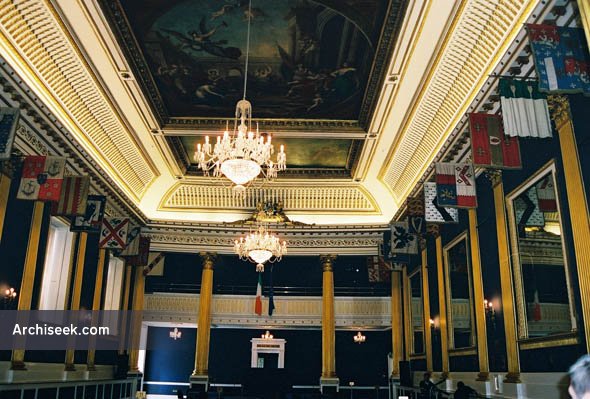 The State Apartments in Dublin Castle were originally constructed as living accommodation for the Lord Lieutenant. The Lord Lieutenants preferred the comforts of the Phoenix Park residence however and tended to live there except for Castle Season when a series of Balls and events was held for fashionable society at the castle. The Apartments are now only used for State occasions notably the Inauguration of a new President and during the Irish Presidency of the European Union. The series of ornate highly decorated rooms stretch along the first floor of the southern range of the upper yard.

There are many other important rooms, notably the Wedgwood Room, an oval room decorated in Wedgwood Blue with details picked out in white. It was used as a Billiards Room in the 19th century. As development of the complex happened over time, the rooms date from 1680-1830. 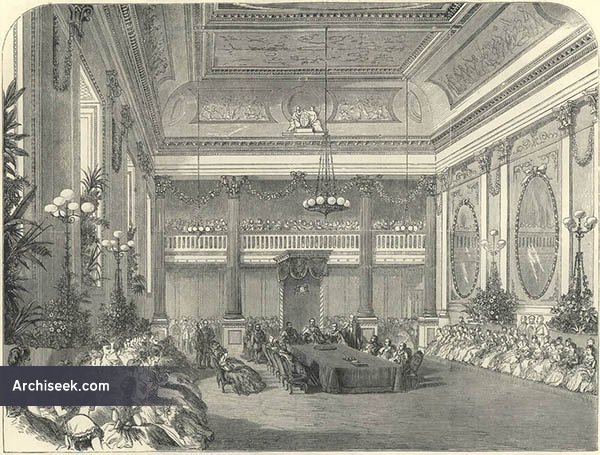 The most imposing room in the Castle is St Patrick’s Hall used for important occasions. The Hall has two galleries, one at each end, one for musicians and the other for spectators. The hanging banners are the arms of the members of the Order of St Patrick whose inaugurations were held in the hall. The room is in a gold and white colour scheme with the Corinthian columns picked out in gold. With a richly coloured carpet and ceiling, this is a stunningly ornate room.

Its hugely ornate painted ceiling by Vincenzo Valdré. He was of Italian decent and brought to Ireland by his patron, the Viceroy Lord Temple. He was appointed in 1792, the Architect and Inspector of Civil Buildings in Ireland. In the central panel, is depicted George III between Britannia and Hibernia in the central panel, various cherubs, Liberty, and Justice. The other panels depict St Patrick, and Henry II receiving the surrender of the Irish chieftains.

The Drawing Room was largely destroyed by fire in 1941. After reconstructed it was refurnished in 1968 in an 18th Century style. The room is heavily mirrored with mirrors opposite the north facing windows, between the windows and even under the console tables so that ladies at Castle Balls could check their petticoats. The two very large chandeliers are Waterford Crystal. 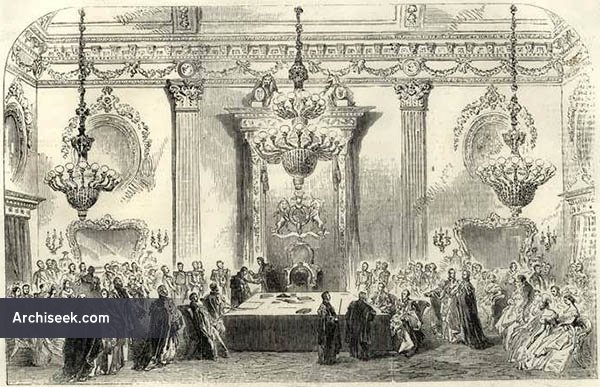 The Throne room, originally known as Battleaxe Hall has a Throne presented by William of Orange. Originally the room was used for receptions hosted by the King and Queen when on a visit from London. The walls are decorated with roundels painted by Giambattista Bellucci, depicting Jupiter, Juno, Mars, and Venus.

The State Corridor on the first floor of the State Apartments by Edward Lovett Pearce is one of the fine interiors of Dublin Castle. Used to link the main State Apartments which all open off it, the corridor was originally top lit like the corridors in the Parliament in College Green. Originally the areas between the arches were lit by elliptical roof lights. All were removed except one off the Battleaxe landing when the attic storey was put on the buildings of the upper yard.