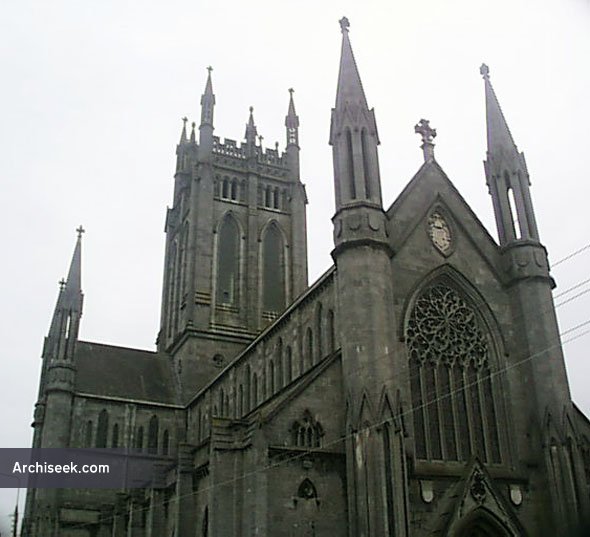 Kilkenny has two cathedrals, the older St Canice’s belonging to the Church of Ireland and St Mary’s for the catholic faith. Both are fairly similar in size, although the tower of St Mary’s is higher, carried up another level to finish in a lantern surmounted by pinnacles. Designed by William Deane Butler, the cathedral draws its inspiration from Norman architecture. Not a large cathedral by the standards of the day, with many slightly later cathedrals by J.J. McCarthy being far larger, the building is cruciform with a nave of five bays and aisle-less transepts. The interior was remodelled in line with the Vatican II proposals, but here it is much more sympathetic than many, for example the changes at McCarthy’s masterwork at Monaghan.

The adjoining presbytery which is linked to the cathedral by an angled covered passageway dates from 1864, some twenty years after the start of the cathedral project.

The interior of the new cathedral was described in 1866 by The Dublin Builder, “The recently executed decoration of the interior of the building called forth the warmest encomiums on the eminent artists to whom it was entrusted, and whose names have frequently appeared in our columns in connection with other praiseworthy specimens of art work. The following will give but a poor idea of the present appearance of this interior :— The chancel ceiling (except that of the apse which is azure powdered with gold) is painted a rich crimson color as a ground for elaborately designed foliage in gold and appropriate tints ; the ribs of panels and bosses are highly decorated in gold and color. In the centre panel is a representation of the Holy Spirit as the Dove. The cornice is treated in rich tints and gold, setting out forcibly the mouldings, immediately beneath which is an inscription. The main walls down to the string-course are of a warm vellum tone, and the reveals of the windows are ornamented with geometric forms in color. Under the string-course are exquisitely-painted figures of our Lord” and twelve Apostles, surrounded with ornamental foliage on a maroon ground, and between the Apostles are scrolls having on them the Creed. The remainder of the walls are powdered with decorated crosses and gold pateroe. The mouldings of the arches are covered with chevrons and gold fleur-de-lis; the reveals have a geometric design u^on which are gold and white monograms on red and blue rounds, with vine leave?. Under the lower windows the walls are diapered with gold monograms and parcel gilt crosses, on a rich ground of red and green. The effect of the whole is good, giving the full richness of colour without a gaudy appearance.

The Ladye Chapel is decorated so as to give a general tone of azure. The ceiling is powdered with gold stars on a blue ground, the ribs having on either side a border of white roses on a red ground. The cornice is illuminated with gold and colors. Underneath is an inscription. The walls are covered with monograms and crowns of gold and white flowers upon a light azure ground ; beneath the string course, at the back of the altar, the wall is diapered with geometric designs in green and gold. On the opposite side of the cornice is an inscription from the Apocalypse. Over the recess, next the statue of the Immaculate Conception, is a scroll, in medieval lettering, and on the opposite side is another in similar character. The reveals are richly painted with vine leaves and scrolls.

In St. Joseph’s Chapel the ceiling and cornice are treated in a similar manner to those of the Ladye Chapel ; the walls are of a cold grey purple tint, upon which are monograms of gold in geometric forms of blue. The back of the altar will be richly diapened; above the recesses are inscriptions. A stained glass window has been recently erected ; it consists of two lights with tracery, and contains figures of the Blessed Virgin and St. Joseph. In the tracery is the emblem of the Holy Trinity. The reveals are specially designed and colored to suit, and bring out the full tone and power of the stained glass.

The entire of the decorative works have been executed by Messrs. Early and Powells, of Camdenstreet, Dublin.”