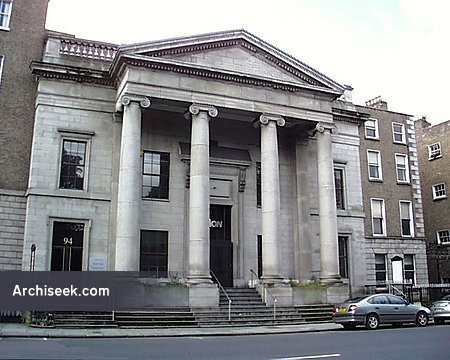 Previously the congregation was based in Whitefriar St., but it was leased. After applying for a renewal, the congregation was informed that a new lease on the property had been offered elsehwhere. After a fundraising drive, some £5000 was allocated to build a new “Centenary church”. A site on St. Stephens Green was purchased, not leased, for £1700. The building was completed and opened in June 1843.

After a fire on 22nd December 1968 that destroyed everything bar the facade, this former church was developed as offices. For a time the congregation used the Wesley College Chapel nextdoor, but with the removal of the college to Ballinteer, they moved to share Christ Church, Leeson Park in 1972. Now used by the Irish Department of Justice, Equality and Law Reform, the facade had extra windows inserted during redevelopment.