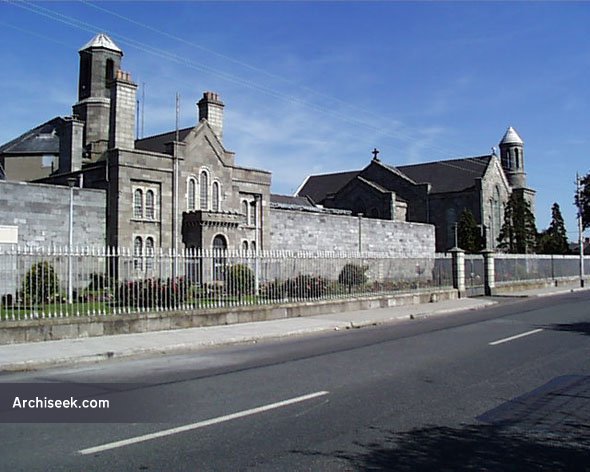 The smallest of Dublin’s Victorian prisons, Arbour Hill Prison was originally designed in 1835 by Jacob Owen and later rebuilt in 1845 by Sir Joshua Webb with Frederick Clarendon. A tripartite facade – the central entrance block is linked by screen walls to the chapel and to the govenor’s house. Of these structures the most interesting is the chapel by Richard Cuming, an Assistant Surveyor under Commanding Royal Engineers.

The chapel has an elaborate cruciform interior and roof, and stained glass by the Harry Clarke Studios behind the altar. The church has an unusual entrance porch with stairs leading to twin galleries for visitors in the nave and transept. This feature is copied from the National Scotch Church, Bow Street, London designed by Robert Wallace. Also an unusual feature is the Celtic round tower which erupts from a rectangular base.