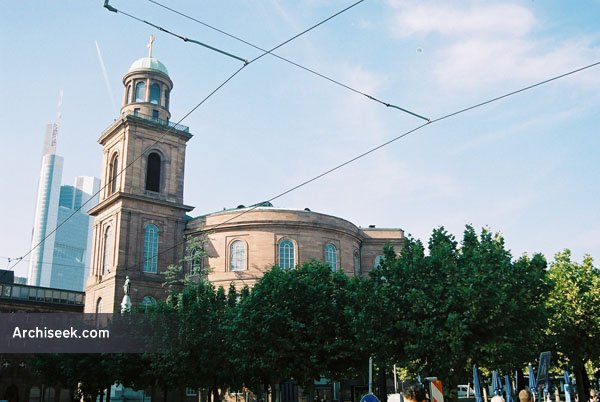 Started in 1786 but not finished until 1833 because of war with France, Paulskirche is no longer a church. It was the site of the first German National Assembly in 1848 and it became a symbol of republican and liberal Germany. The deputies who assembled in the church had been sent from all the German kingdoms and principalities. Bloody fighting in the streets of Berlin and Vienna had convinced Prussia and Austria that they could not resist the popular uprising against the generation of repression that followed the Congress of Vienna. The Frankfurt Parliament drew up a constitution for a united Germany, but first Austria and then Prussia withdrew, and the movement for unity collapsed when Frederick William IV of Prussia refused to become emperor.

It was rebuilt after the bombing raids of the Second World War, but the interior is now modern in nature. The main body of the buildings is a distinctive rotunda design. It is now used for public functions. On June 24, 1963, President John F. Kennedy gave a speech entitled “A New Social Order” in the church.