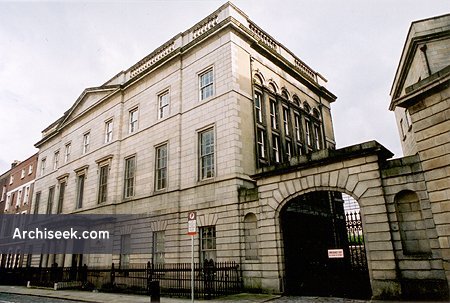 Designed by Frederick Darley in 1827, the Library building of the Kings Inns replaced three of the oldest houses on the street. It is visually connected to the Inns by a stone archway.

Described by Lewis in 1837, “The library of the King’s Inns is kept in a separate building, erected in Henrietta-street in 1827, at an expense of £20,000, after designs by Mr. Darley: the upper story is a spacious apartment, with recesses for the books and a gallery continued all round; it contains a very extensive collection, which was partly the property of Christopher Robinson, Esq., senior puisne judge of the Court of King’s Bench; the law books were chiefly selected by Earl Camden, Lord-Chancellor. The library was entitled to one of the eleven copies of new publications appropriated to the public institutions under the late copyright act, which right has been lately commuted for an equivalent in money. The lower part of the building contains accommodations for the librarian.”