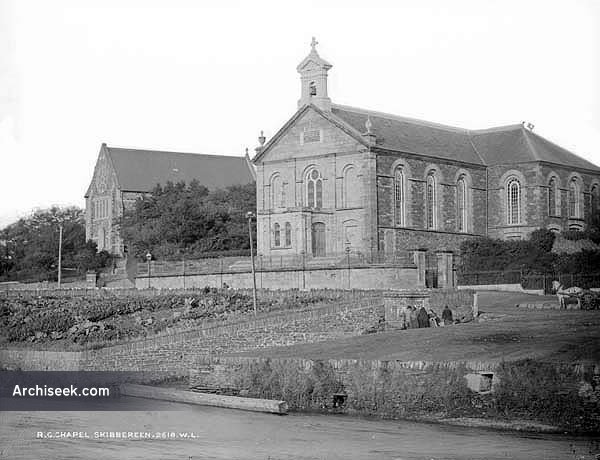 A t-shaped church with galleried transepts, designed by Michael Augustine O’Riordan. O’Riordan, was born in Doneraile, Co. Cork circa 1780. He was a remarkable man by any standards. Educated in the neo-classical style, he worked extensively in Cork City and County. Some of his churches include the North Chapel in Cork i.e. the Cathedral of St. Mary and St. Anne (1808), Blackrock Village (1818), Doneraile (1827), Millstreet (1836), Bantry (1837), Kinsale (1838), and Dunmanway (1841). In 1826, at the age of 42, he made profession as a Presentation Brother. Along with continuing building churches, convents and schools throughout Cork, he spent his time teaching in the schools for poor run by the brothers. 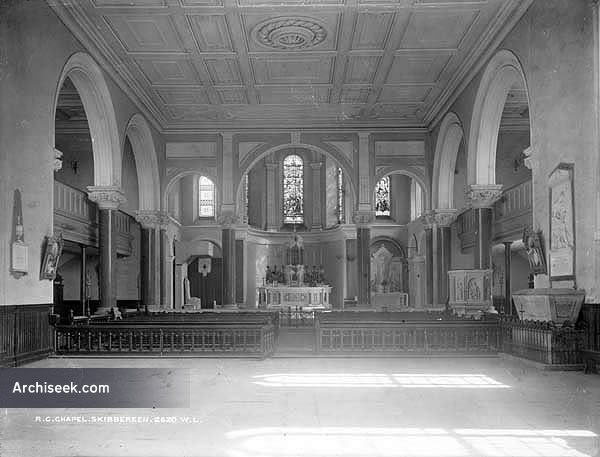 The interior photograph show G.C. Ashlin’s alterations to the original design. These included the construction of a romanesque apse, a new sanctuary, and the building of arches in front of the galleries (as the photograph shows, the pillars of the arches were built right in front of the original galleries). This altarpiece by Cork painter Samuel Forde and tabernacle is now in St. Barrahane’s in Castlehaven, an elegant classical edifice of this period.