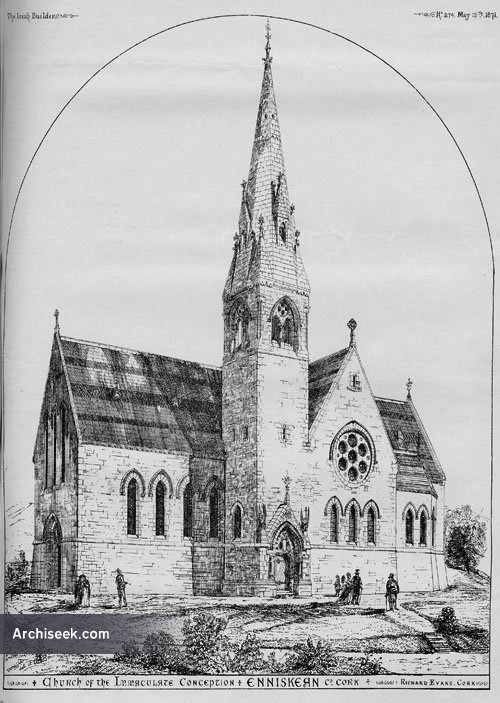 After almost being bankrupted by the building of the Roman Catholic parish church of Crosshaven, designed by E.W. Pugin, Richard Evans, a builder, designed this church in Enniskeane. This is a simple austere church without aisles.

“WITH our present issue we give an illustration of the new Catholic church, the erection of which has just been commenced by the Rev. Dr. Coveney, P.P., at Enniskean. The style, which is Early Pointed, is treated in a bold and simple manner, and with a decidedly Irish feeling in its details, as indicated by the entire absence of buttresses,. the high-pitched gables, and flush barge copings, &c. It is cruciform on plan, the nave and chancel being the same breadth and height throughout, measuring 110 ft. long by 30 ft. wide; the transepts, north and south, being 61 ft. by the same width. The “ladye chapel “””which, owing to the dedication of the church, has had bestowed upon it a larger amount of ornamentation than the rest””is to terminate at the east end with a semi-octagonal apse, and is. To finish internally with molded stone arcade over the windows, supported on shafts of Cork red polished marble, with carved capitals. This chapel runs parallel with the chancel, with which, as also with the south transept, it will communicate by large arched openings. The tower occupies the corresponding angle, formed by the south transept and nave; it will be surmounted by an octagonal broach spire””total height, 110 ft.””the lower portion forming an ample porch, through which will be the principal entrance. There will also be a large doorway in the western end, and another in the north transept, each protected by a porch. An, ample sacristy and a separate vestry for acolytes completes the arrangement, which is a very convenient one, and in, every way suited for the purpose of a country parish church, affording accommodation to about 900 persons, so that they may all both hear, and see the officiating clergyman. The carving is to be confined to the principal doorways, on the tympana of which “the Immaculate Conception,” and the various symbols of the Blessed Virgin will be executed in alto-relievo. All the dressings and masonry will be exclusively of local material, a quarry of a light warm-tinted sandstone of sound, good quality, and easily worked having been found in the neighbourhood. The roof is to be open timber work, wrought and varnished. The design is by Mr. Richard Evans, of Cork.” Published in the Irish Builder, Vol. XIII, 1871.