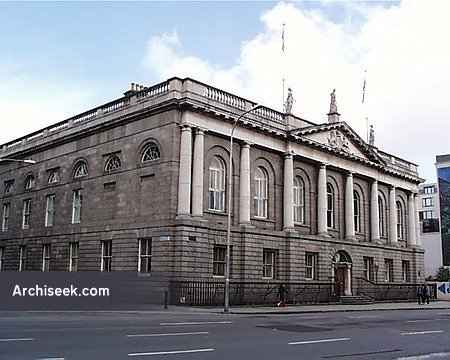 Beautifully sited on St. Stephen’s Green, the building of the Royal College of Surgeons in Ireland was built in two phases. The original building was the last three southern bays of the existing structure and 5 bays deep along Yorke Street. Designed by Edward Parke, this was absorbed into the later structure of William Murray – a prominent bank architect and cousin of Francis Johnston.

Murray added 4 bays to the north and moved the pediment to the new centre of the building.. The facade is distinguished by large round headed windows on the main facade separated by free standing columns. The pediment has the Royal Arms and is capped by three statues – Athena (Goddess of Wisdom and War), Asclepius (God of Medicine) and Hygiea (Goddess of Health) all by John Smyth. 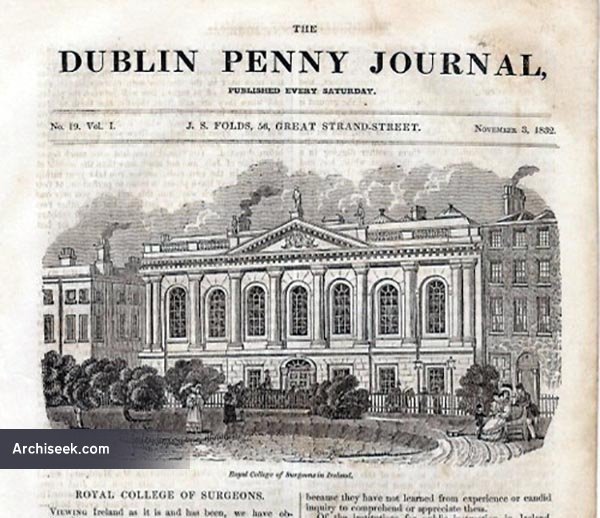 Described by Lewis in 1837 as, “The front of the building, which is situated on the west side of St. Stephen’s-green, has a rusticated basement story, from which rises a range of Doric columns supporting a tier of seven large windows, the four central columns being surmounted by a triangular pediment, on which are statues of Minerva, Esculapius and Hygeia.

The interior contains a large board-room, a library, an apartment for general meetings, an examination hall, with several committee-rooms and offices, four theatres for lectures, a spacious dissecting-room with several smaller apartments, and three museums, the largest of which, 84 feet by 30, with a gallery, contains a fine collection of preparations of human and comparative anatomy; the second, with two galleries, contains preparations illustrative of pathology and a collection of models in wax, presented by the Duke of Northumberland when lord-lieutenant; and the third, attached to the anatomical theatre, contains a collection for the illustration of the daily courses of lectures.”

The interior of the building is very elaborate with an impressive hallway and top lit staircase with Adamesque plasterwork. Also of note is the boardroom by Parke. The RCSI played an important part in the Easter Rising of 1916 – it was occupied by rebel forces led by Countess Constance Markievicz and remained relatively unscathed although bullet holes are visible on the stonework.