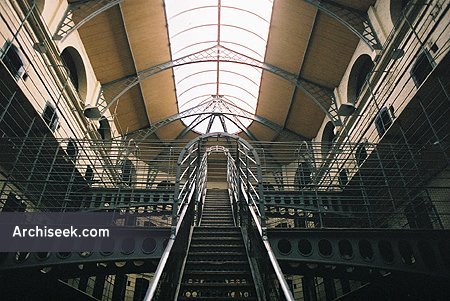 Built in 1796, Kilmainham Jail has witnessed many of the events leading to Irish independence: Prisoners from the United Irish Rebellion of 1796, the Emmet Rebellion of 1803, the Great Famine of 1845 to 1851, the Young Ireland Rebellion of 1848, the Fenian Rebellion of 1867, the Land War of the 1880s, the Easter Rising of 1916, the War of Independence and the Irish Civil War were held and often executed here.

The jail has two main areas of cells, and several exercise yards, one of which was used for executing the leaders of the 1916 Easter Rising. The original wing dating from the opening of the jail is incredibly dark and oppressive. The later Victorian wing with its wide walkways and toplit main hall paved the way for new thinking in designs of jails in the 19th century. The interior of the jail can be visited on a guided tour. Some of the photographs above are from the interior of the later Victorian wing. The wide open central hall surrounded by metal walkways and stairwells can be seen and appreciated. In contrast, the tight narrow and dark corridors of the old wing can be seen above. These corridors were often only lit by one window whilst the cells had very small opening to allow the minimum of natural light.

The jail has been used in several movies, notably “In the name of the father” and “The Italian Job”. In both movies it played jails in England.