Beresford Place is a short curving terrace of five houses built on an axis with the central dome of the Custom House. The terrace was designed by James Gandon in 1790 but was much simplified from his designs in execution but still shows James Gandon’s vision for the setting of the Custom House. Much dilapidated externally the interiors are relatively unremarkable. The terrace is named after the Rt. Hon. John Beresford who as Chief Wide Streets Commissioner was responsible for bringing Gandon to Ireland. Beresford had apartments in his role as First Commissioner of Revenue in the northern part of the Custom House and would have been able to see the terrace that bears his name. 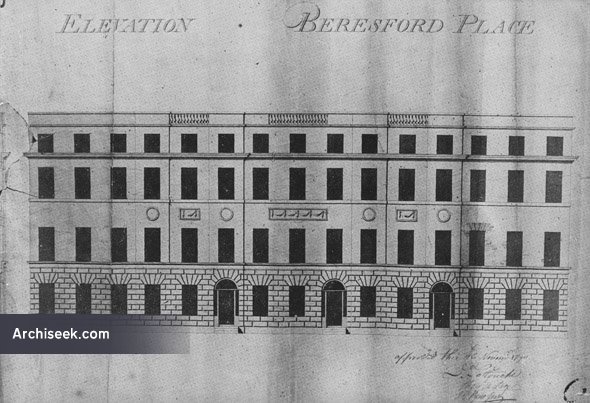 This terrace is now the only example of a unified housing scheme dating from the 1790s. Many schemes were approved by the Wide Streets Commissioners but only this survives. A scheme by Michael Scott and Partners to demolish the block and replace with a bronze office block in the 1960s never materialised and hopefully never will.