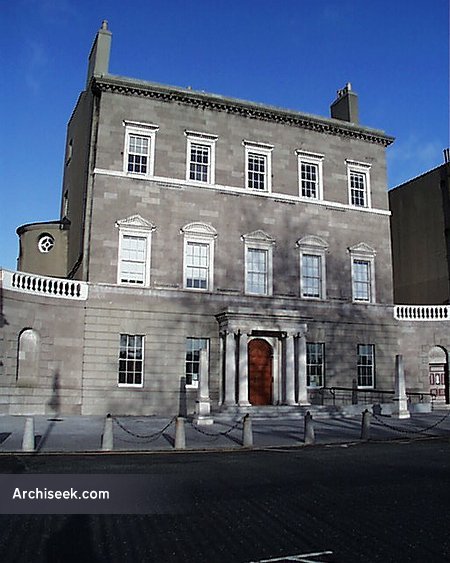 Lord Charlemont had met and befriended Sir William Chambers in Italy while Chambers was studying roman antiquities and Charlemont was on a collecting trip. Years later Charlemont had hired Chambers to design his Casino on his family estate at Marino outside Dublin. When the need arose for a residence in the city Charlemont turned again to Chambers who produced the designs for Charlemont House finished in 1763. The house now the Municipal Gallery of Modern Art consists of a single block of five bays with curved screen walls to either side. The house breaks up the regularity of this side of Parnell Square as it is set back from the other houses.

The original ground floor plan now destroyed had a central vestibule with a staircase placed in a curved bay. There was also a long gallery and pavilion designed to hold Charlemont’s large and important collection of books and antiquities. The space between the pavilion and the main house has now been filled with galleries.

Described by Lewis in 1837 as, “The private library of the Earl of Charlemont is highly worthy of notice. It is contained in a building attached to the town residence in Palace-row: the entrance to it is by a long gallery, ornamented with antique busts, vases, and altars, which opens into a large vestibule lighted by a lantern, which contains the works on antiquities and numismatics, and has in a recess the statue of Venus and eight busts of ancient and modern characters of celebrity. The principal library contains a fine and well-selected collection of ancient and modern writers on most departments of literature and some of science, very judiciously and happily arranged; also some manuscripts, and an unique collection of Hogarth’s engravings, mostly proofs. Over the chimney-piece is a fine bust of Homer. Attached to the library is a small museum, a medal room, and a smaller library of very elegant proportions, containing busts of the Earl of Rockingham and General Wolfe.”

Charlemont’s extravagant building and collecting left his estate in financial difficulties and his successor the 2nd Earl sold everything but Charlemont House, the Casino and Marino house. The 3rd Earl however sold the library which was described as: the finest private library that Ireland is ever likely to see and one of the finest ever brought together on this side of the atlantic.

Charlemont house was sold to the government in 1870 becoming the General Register and Census Offices for Ireland and later the Municipal Gallery for Modern Art – a development that Charlemont would undoubtedly would have approved.