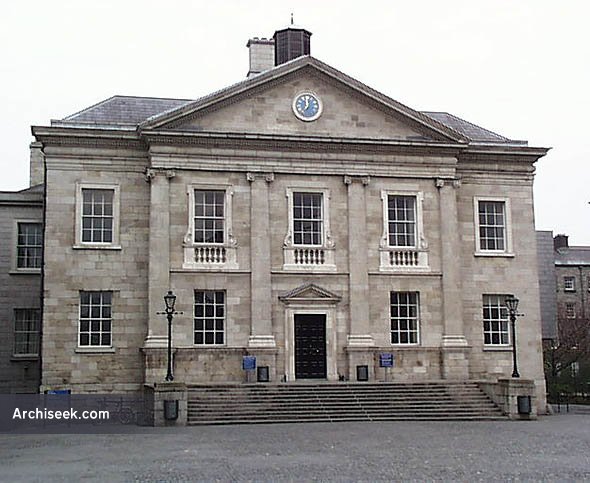 In the 1740s Richard Cassels designed and built a Dining Hall on this site replacing an earlier structure. However on two separate occasions, the vaults collapsed and it was eventually replaced by Hugh Darley’s building that we see today.

It was severely damaged by a fire in 1984 and has since been restored by Dublin architects de Blacam and Meagher. A full reproduction of Adolf Loos American Bar in Vienna’s Kartner Strasse was installed in the former Senior Common Room above the Dining Hall.

From Lewis, A Topographical Dictionary of Ireland, 1837 “The refectory is a neat building, ornamented with four Ionic pilasters supporting a cornice and pediment over the entrance; a spacious ante-hall opens into the dining-hall, in which are portraits of Henry Flood, Lord Chief Justice Downes, Lord Avonmore, Hussey Burgh, Lord Kilwarden, Henry Grattan, the Prince of Wales (father of George III.), Cox, Archbishop of Cashel, and Provost Baldwin.

Over the ante-hall an elegant apartment has been recently fitted up for the Philosophy school, and furnished with a valuable collection of philosophical and astronomical instruments; and in it are delivered the public lectures of the professors of natural philosophy and astronomy.”