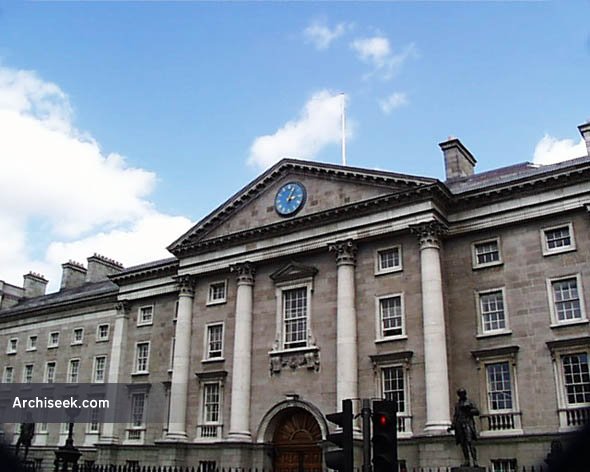 Until recently it was assumed that two english architects Henry Keene and John Sanderson were responsible for the design of the main west front of Trinity College. However newer evidence points to the english amateur architect Theodore Jacobsen. In 1751, the board of the college asked Parliament across the road for financial help in reconstruction. As any unspent money was returned to the English Parliament, the Irish MPs were very receptive to spending all their money in Dublin and finance was forthcoming. The result was that Trinity was housed more grandly than any college in Cambridge or Oxford.

Originally the 150ft long frontage was to be crowned with three copper cupolas, one at either end and a massive one in the centre, until a returning traveller from Europe who obviously had some political clout objected to them on the grounds that ‘no where to be met with in Italy in such buildings’. The cupola on the south side was even constructed and until relatively recently its footprint could be seen from above. The massive vaulting for the central cupola still exists at ground level. 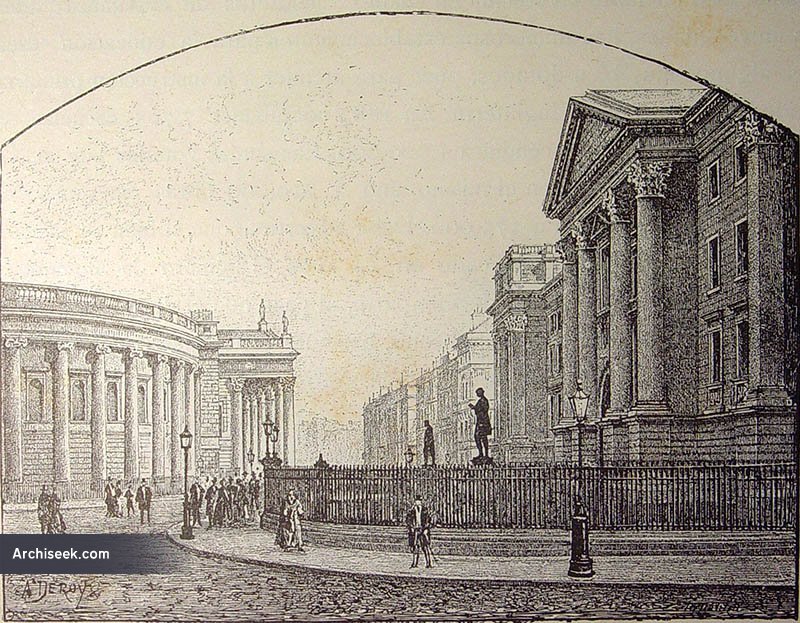 The external design in a modified plainer form was used in the quadrangle known as Parliament Square after the munificence that allowed it to be built. Trinity had close links with Parliament – having two Members of its own and anyone in a college gown had the automatic right of entry to debates in the House of Commons – a privilege revoked by Speaker Foster in 1795.

Originally William Chambers when designing the Chapel and Examination Hall wanted Parliament Square to be completed with a range of monumental building in the area of the present Campanile. This has left the square open at one end losing the sense of a quadrangle and monumentality when viewed from the west. From the east the square with the chapel and examination hall retains a sense of Chamber’s plans. 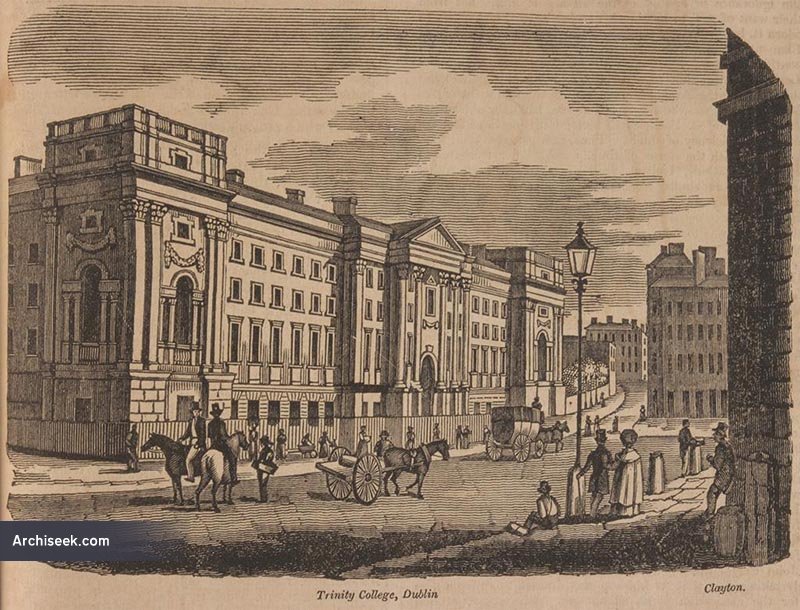 From Lewis, A Topographical Dictionary of Ireland, 1837 “The buildings of the university, which, from their extent and magnificence, form one of the principal ornaments of the city, consist of three spacious quadrangles, erected chiefly after designs by Sir William Chambers. The principal front, which occupies the whole of the eastern side of College-green, is 380 feet long, built of Portland stone, and consists of a projecting centre, ornamented with four three-quarter Corinthian columns supporting an enriched cornice and pediment, under which is the principal entrance; and at each extremity of the facade is a projecting pile of square building, decorated with duplicated pilasters of the same order, between which is a noble Venetian window, enriched with festoons of flowers and fruit in high relief; and above the cornice, which extends along the whole of the front, rises an attic surmounted by a balustrade.

The entrance is by an octangular vestibule, the ceiling of which is formed of groined arches: it leads into the first quadrangle, called Parliament-square, from its having been rebuilt chiefly by the munificence of Parliament, which granted at different times £40,000 for the purpose. This quadrangle, which is 316 feet in length and 212 in breadth, contains, besides apartments for the fellows and students, the chapel, the theatre for examinations, and the refectory.”