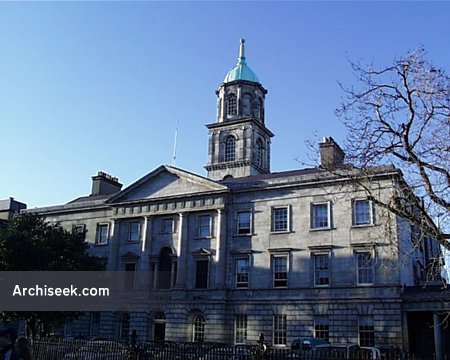 The Rotunda Hospital officially the Dublin Lying-in Hospital was the first maternity hospital in Britain or Ireland and was at one time the largest in the world. Really it is two separate complexes, the hospital proper and the Rotunda or social rooms from which the hospital derives its name.

Originally the hospital was started in 1745 in South Great Georges Street but was moved here in 1748 by its founder Bartholemew Mosse (1712-1759). At this time the site at the top of Gardiners Mall was bordering on the open countryside. The design by Richard Cassels who was a friend of Mosse is based on his design for Leinster House. The design of the building and its environs were intended to aid fundraising (the hospital was totally dependant on charity) – the social rooms were intended to provide entertainment, there were pleasure gardens around the hospital, and the exterior façade was designed to attract attention from the fashionable quarters of Dublin society.

Visually the exterior of the Hospital is a country house composition with its wings and curving links. The central block is distinguished by the large window in the centre that lights the chapel inside and the campanile with its decorative baroque copper dome. The campanile is placed centrally in elevation but is sited to the rear of the block.

The Rotunda itself contained entertainment rooms and was extended many times from its original design by James Ensor including additions by Richard Johnston and James Gandon. While the exterior is relatively undistinguished for a building closing such an important vista – it closes the top of O’Connell Street, the interior of the rotunda was considered to be one of the finest circular rooms in Britain. James Gandon was responsible for the sculpted stone frieze around the exterior of the round room as well as the entrance block to the theatre. 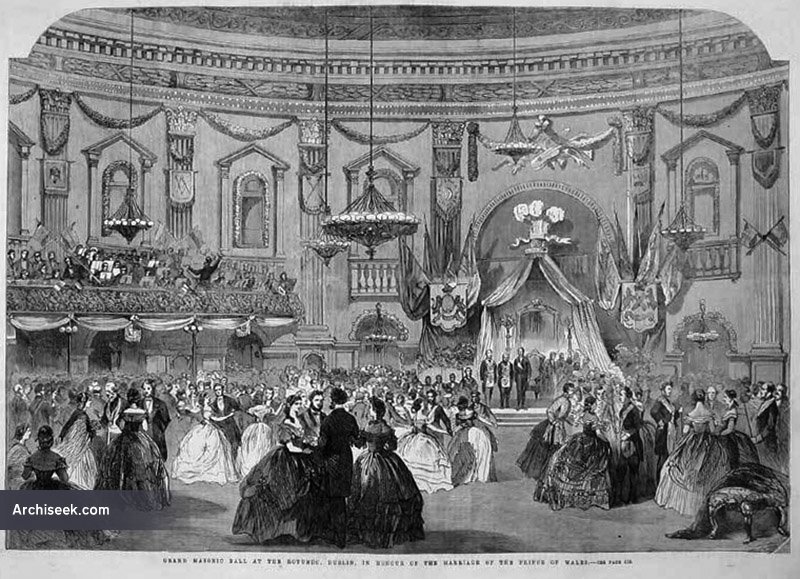 The Round Room is now the Ambassador Theatre, formerly a cinema, the Supper Rooms are the Gate Theatre, and the Pillar Room underneath the Theatre is occasionally used for concerts. The curving wings that link the smaller blocks to the main body of the hospital create some interesting public spaces – the bar of the Gate Theatre for example.

The most important feature of the hospital interior is the sumptuous chapel – again this was a form of fundraising as Charity sermons were a popular form of entertainment for the social classes and so the chapel was placed at the center of the design, above the main entrance at first floor level.

The most important features of the hospital interiors are the public rooms, the staircase and the chapel at the heart of the complex. The public rooms are designed as a processional route through the hospital to the main public room – the chapel. While these room are elegant, with beautiful plasterwork by Robert West, they are as nothing in comparison with the chapel.

The chapel is a rococo vision of gilt plasterwork and decoration by Bartholemew Cramillion – a german stuccodore. The original intention was to supplement the plasterwork with paintings by the Italian artist Giovanni Battista Capriani which were never installed. This is all to the better of the interior as the empty spaces act as a foil to the decorative plasterwork.

The decorative scheme is based on a line from Corinthians – ‘And now abides Faith, Hope, Charity, these three; but the greatest of these is Charity’. Accordingly in the coved ceiling there are alcoves in which sit figures symbolising the virtues, surrounded by cherubs and angels. As one of the primary uses of the chapel was the raising of money, accommodation was maximised by placing a balcony on corinthian columns around three sides of the chapel.

“An apartment over the grand hall, 36 ft. by 35 ft., furnished with pews of mahogany, and a gallery supported by pillars; an en tablature extending round the chapel beneath the front panels of the gallery, is handsomely ornamented with gilding. The ceiling, which is beautifully wrought in stucco-work, is not only remarkably curious, but in a style totally different from any work of the kind in this city. Over the communion-table is a con sole supporting a lamb in alto-relievo, with a richly-decorated canopy above it, and on each side an angel, of life size, reclining upon it. On the north side of the ceiling, in a deeply-arched recess, is Faith, with a crucifix in her hand, in a recumbent posture; over the communion-table, in a similar recess, is Charity, with infants; and on the south side, Hope. Above the organ, is Moses with the Tables of the Law; and, corresponding to him, an angel blowing a trumpet. All these figures are in alto-relievo, and are also of life size. The design of this beautiful piece of workmanship was by Cremillon, a French artist, and executed by two Italian sculptors, named Francini.” The Irish Builder, December 15 1893.