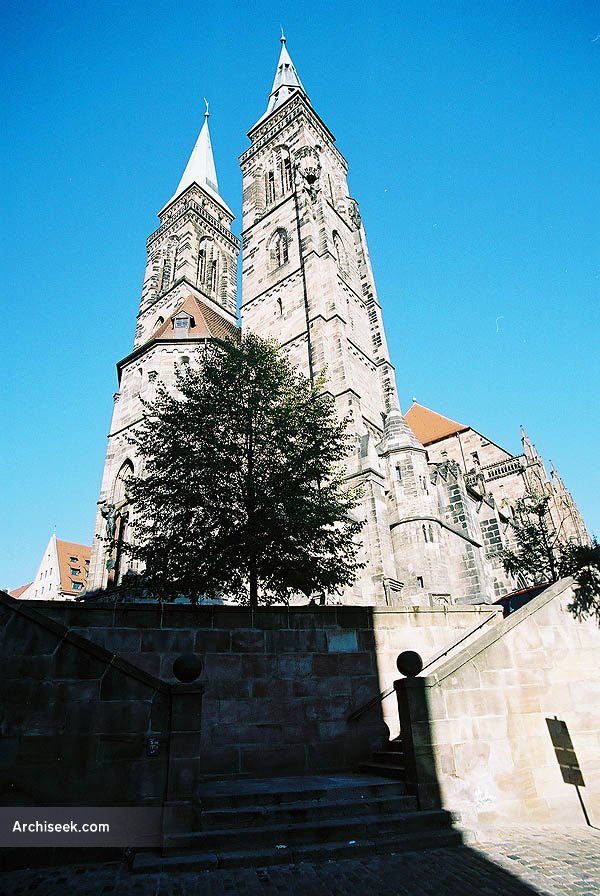 Consecrated in 1273, this church is an excellent example of the transition from Romanesque to German Gothic styles. Originally built as a Romanesque basilica with two choirs, it was re-modeled during the 14th century. During this, aisles and the soaring western choir were added. The two towers were completed in the 15th century. The church was very badly damaged during the Second World War and has been completely restored. In places it was decided to add new features to replace those which could not be repaired. The images of the two main doorways show an original carving and a new one added during the restoration. The interior is probably the finest in Nuremberg.

The nave and west choir are late Romanesque, with a narrow chancel containing a simple altar and an ancient bronze baptismal font. The larger east choir, consecrated in 1379, is Gothic and contains the church’s most important treasures. Just behind the altar is the elaborate shrine of St. Sebald, whose remains are encased in a monument cast in brass by Peter Vischer in 1519. It’s supported by an array of snails and dolphins and adorned with a host of statuettes. The nave of the church also holds several important works of art, including 14th-century statues of St. Catherine and St. Sebald and the Madonna with a Halo (1440).