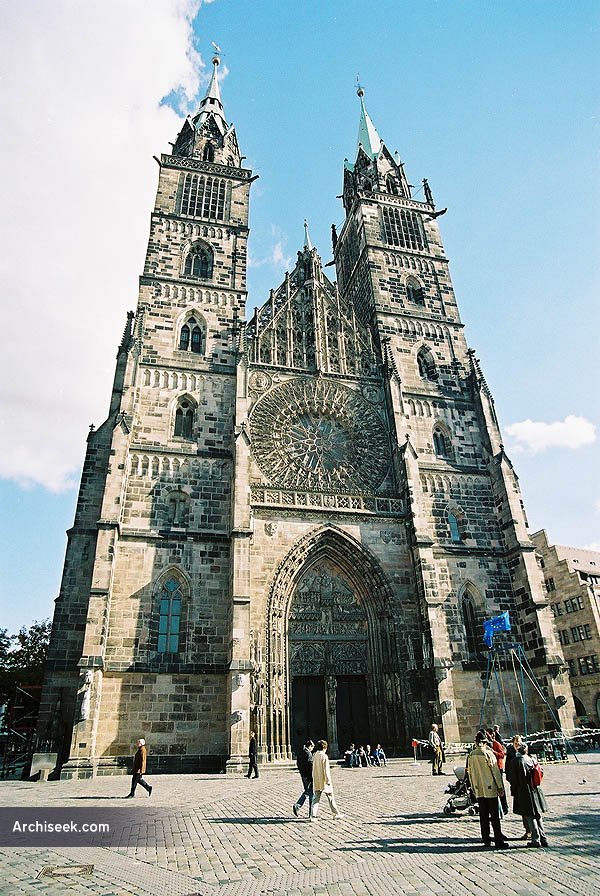 Begun in 1270, St Lorenz Kirche took more than 200 years to complete. An important part of the Nuremberg skyline, its twin spires flank the main west doorway. The doorway sculptures depict the theme of redemption, from Adam and Eve through the Last Judgment.

Like other churches in Nuremberg and Germany, the choir is considerably higher than the nave and aisles. This means that internally, the choir is brighter, lit by taller windows than the remainder of the church. The choir was the last portion of the church to be completed in 1477. St Lorenz Kirche has a fine interior with many sculptures. The building was badly damaged during the Second World War.

The interior of the church is quite dark in the nave and aisles but considerably brighter around the choir and altar. St Lorenz Kirche is full of carved figures, many mounted onto the tall columns of the nave, and dating from the 14th century.

The Annunciation of 1519, carved in linden wood by Veit Stoss, is suspended from the roof of the church above the altar. The painted panels at the beginning of the choir are by Michael Wolgemut, Dürer’s teacher.

Much of the church’s stained and painted glass dates from the 15th century. Each column is adorned with sculptures carrying on the theme introduced at the entrance. The oldest of these is Mary with Child, created around 1285.