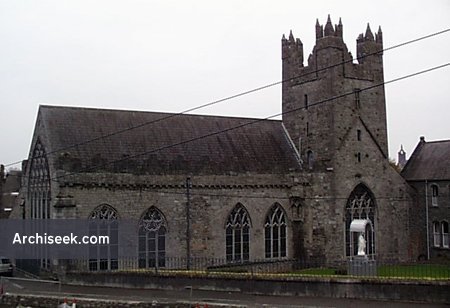 Founded by William Marshall the Younger, for the Dominican Friars in 1225, the Black Abbey was also known as the Convent of the One and Undivided Trinity. It was suppressed in 1543, converted into a courthouse and served as such until the end of the 17th century. Partially restored in 1778, the Abbey did not become a place of public worship until the mid-19th century when it was converted into a parish church. The exterior bears the marks of the church being much larger with long-disappeared aisles. This can be seen on the walls of the tower in the photograph above. The current church is “L” shaped, so it can be surmised that the Abbey lost a transept at some stage.

The interior is very atmospheric with clear glazing throughout most of the “L” shaped church but with some very unsuitable modern glass inserted behind the altar. The stonework throughout is excellent and the interior has a fine wooden roof.