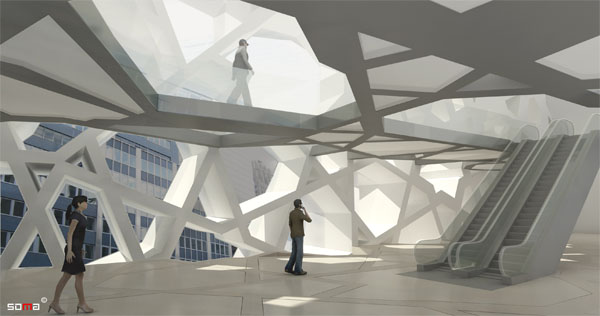 With headlines slamming the “Triumphant Ground Zero Mosque” and pointing out that the “Ground Zero Mosque is Not a Religious Freedom” one wonders what those opposing Park 51 – the real name for Manhattan’s controversial Islamic community centre – thought when they saw what it might actually look like.

For those imagining a New York version of Al-Masjid al-Nabawi plonked right on top of the Trade Center site, or those worried about seeing minarets ready to blare Allahu Akbar as far as Houston St, pictures of the centre released last month may have made for inconvenient viewing.

In a somewhat unusual move, Soma released the images at a “˜working drafts’ stage, but with good reason. The centre has become a near constant source of debate stateside, and with recent reports of protests over proposed mosques in Brooklyn and Long Island, (1) principle architect Michel Abboud now says the release was strategic.

Regular to some perhaps, but not others. He believes the building’s design needs to be seen by as many people as possible because “it was always going to be seen as a facade, and the facade was going to become the iconic element”.

But the problem with this iconicity is that the center now represents something divorced from what it actually is, he says. What is essentially an Islamic version of a YMCA looks set to remain both politically and culturally divisive.

Commentators are divided over the scheme. Just weeks ago Joy Behar and Whoopi Goldberg stormed off the set of The View when Fox News heavy Bill O’Reilly branded the project inappropriate because “Muslims killed us on 9/11″. And more recently, Saudi Prince – and News Corporation shareholder – Walid bin Talal came out against the scheme. (2)

Perhaps unsurprisingly, failed New York gubernatorial candidate Carl Paladino also strongly opposed the scheme, telling reporters “we certainly will not allow the erection of a monument to the triumph and the conquest to America”.

This is, of course, the building that almost 70 percent of Americans are reportedly against (3) and the structure that many have dubbed un-American. But, Abboud says, the centre has been designed to unify, not to divide.

“From the get go we understood the importance of the site. We had to come up with a concept that was going to please the various parties involved, the community itself, New Yorkers and Manhattan,” he adds.

Park 51 is not a mosque, nor is it at Ground Zero. It is an interfaith community centre located two blocks away. The building will contain a prayer room for Muslims – the part of the centre that has earned it the misnomer “˜Ground Zero Mosque’ – over two levels in its basement. A 9/11 memorial would be open to people of all faiths on the 12th floor.

Abboud says that while the idea of unification is central, it is also a design deeply rooted in Islamic culture. Central to it is the idea of thuwid, or unity, with the facade operating as a modified version of the Islamic Mashrabiya. Mashrabiyas, or projected bay windows enclosed with wooden latticework, are used extensively in Islamic architecture, and are famously modernised in Jean Nouvel’s Institut du Monde Arabe in Paris.

But the centre also takes its influence from various other sources: its business model comes from the Jewish Community Center on Manhattan’s Upper West Side, and indeed some commentators have pointed out that the design appears to include a Star of David.

Abboud denies that this is true: “It’s not a Jewish Star of David, it’s a star-shaped pattern. But if it was a Star of David it wouldn’t be much of a problem”.

He reminds me that the plans may change, and reemerge in a different form. But does he think the project may have become too controversial to actually go ahead?

“The building is currently being used a prayer room anyway. It’s only going to help,” he says.