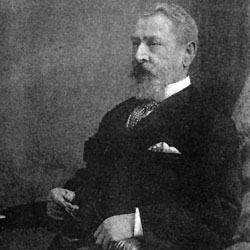 Thomas Edward Collcutt was born in Oxford on 16 March 1840. He was educated at the Oxford Diocesan School at Cowley and at Mill Hill. In 1856 Collcutt was articled to Richard Armstrong, an Edinburgh-born London-based architect who had been an assistant with Edward Blore and had some connection with David Bryce. At the end of his articles he became an assistant first to Mills & Murgatroyd and then to George Edmund Street, subsequently spending some time with the cabinetmakers Collinson & Locke which gave him experience in high-quality woodwork. In 1867 he moved to Brighton as assistant to its burgh surveyor P C Lockwood, working on the conversion of the Pavilion stables riding school into assembly rooms.

Collcutt commenced independent practice in London in 1869, one of his earliest private clients being his former employers Collinson & Locke whose Fleet Street premises he designed in 1873-4. In 1872, when briefly in partnership with the obscure H Woodzell, Collcutt won his first competition, the Public Library and Museum at Blackburn, Lancashire. In 1877 he won that for the Town Hall at Wakefield with a Gothic design in deference to the assessor, his former master G.E. Street, but in execution redesigned it in a predominantly English early Renaissance manner which was to become characteristic of his work in the 1880s and 1890s, increasingly infused with refined French and Hispanic detail, frequently executed in terracotta.

These successes resulted in him being admitted FRIBA on 13 January 1879, his proposers being Street, James Brooks and Edward Robert Robson. By 1886 he had acquired sufficient standing to be nominated for the limited competition for the Imperial Institute in South Kensington, which he won, the building being completed in 1893: his refusal to shorten the tower is said to have cost him the knighthood usually conferred for such buildings. The story may be apocryphal, but no other major government commission came his way and the remainder of his career was spent on a flourishing practice of private and commercial client work, notably for Richard D’Oyly Carte at the Royal English Opera House (1891) and at the Savoy, where a bold High Renaissance treatment in white faience was adopted. In his domestic work an accomplished English Arts and Crafts manner was adopted from about 1900.

Collcutt was awarded the Royal Gold Medal in 1902. From 1906 he was in partnership with Stanley Hinge Hamp, born 1877, who had been both pupil and assistant and had briefly left to establish his own practice in 1904. Collcutt retired in 1920, devoting his time to writing ‘London of the Future’ (published in 1923), a book which discouraged open fires and advocated central heating to improve the atmosphere. He died at Southampton on 7 October 1924. The Buenos Aires architect Bertie Hawkins Collcutt (1883-1937) was his nephew.