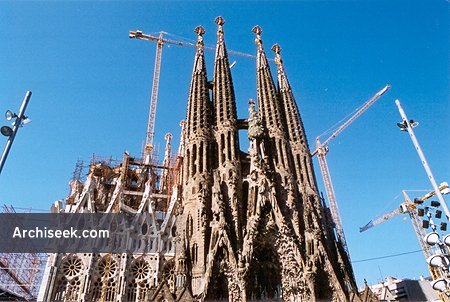 Estimated to be completed by 2041, the Temple de la Sagrada Família is under construction since 1882. Two years after the foundation stone was laid, Gaudi took control of the project and devoted much of the remainder of his life to working on the building. At the time of his death only the Nativity Facade with one tower, the apse and the crypt were complete. Today visiting the building is visiting a building site – admission fees are paying for the completion of the church.

The church as designed will have eighteen towers, four on each facade, symbolising the twelve apostles and a massive central tower over the nave crossing symbolising Christ. The other five will sybolise the four evangelists and the Virgin Mary. The three major facades will depict: the Nativity; the Passion; and the Glory of Christ. The building will be 310 feet long by 197 feet wide. The central tower will be 560 feet high and the others will be over 329 feet. Finished it will seat 13,000 people.

Gaudi had taken much of his inspiration from nature. Notwithstanding the sinous forms and organic nature of the architectural detail, there are giant turtles supporting the columns on the Nativity Facade, and giant shells on the apse.

The only facade completed in Gaudi’s lifetime, the Nativity facade is a baroque masterpiece – a facade of swirling carved stone excess. The facade has three main portals like traditional gothic cathedrals – each of these culminates is a spire, behind which the four towers soar into the sky.

The central doorway shows the birth of Christ with the angels announcing hius birth hovering over the family. To either side are the Magi and shephards. The left hand door depicts the wedding of Joseph and Mary, the flight into Egypt and the slaughter of the innocents. The right hand door depicts episodes from the early life of Jesus. The facade is covered with luxurious floral sculpture which entwines around the figures and ties the ensemble together.

Work has continued over the years leaving the building with different colours from weathering and different sculptural treatments. Work on the Passion Facade started in 1954, and the nave was roofed over in 2000. The Passion facade depicts the final two days of Christ’s life. The figurative work here was carried out by sculptor Josep Maria Subirachs from 1987 onwards. The soldiers in the work are depicted with helmets that reflect the design of the chimneys at La Pedera (Casa Mila) by Gaudi.

The interior of the church is breathtaking in its size and design.

Using the computer models to test Gaudi’s calculations, architects have managed to create the most amazing interior based on Gaudi’s sketches and models. The columns which support the room and tribunes over the aisles, begin at ground level like regular Doric columns. Their capitals are anything but traditional and sprout further to resemble skeletal trees. The roofing of the nave was only carried out in 2000.

The crypt which stretches between the Passion and Nativity facades contains a larg Gaudi Museum containing models and designs of the building. Gaudi is buried within his masterpiece, his body lies in the Chapel of El Carmen in the crypt. The catholic church is examining evidence for his beatification.